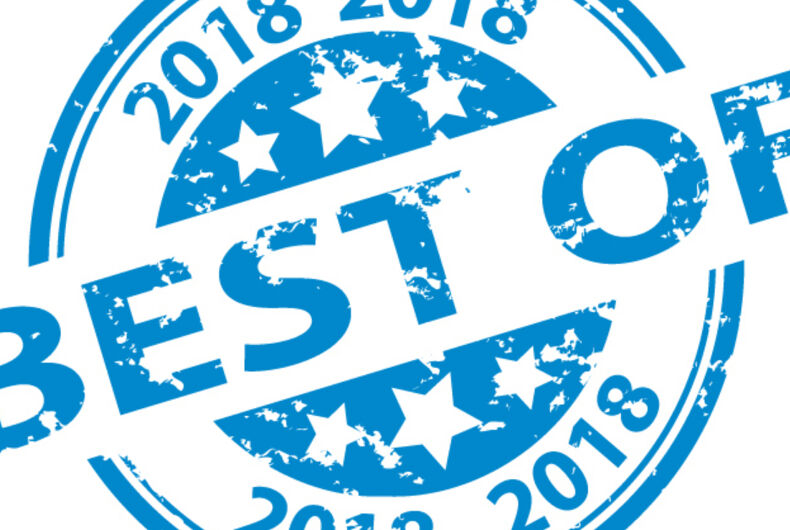 It’s that time of year again. It’s time for lazy writers and editors to comb through old content for roundup end-of-year articles while wistfully dreaming of a holiday break.

As the editor, I’m the last out the door. And it’s New Years Eve.

So here you go: the top story on LGBTQ Nation every month along with the opening paragraph. Let’s call this year a wrap.

…The Trump administration is considering a new “religious freedom” rule that would allow healthcare workers to refuse to treat LGBT patients. The move would also allow workers to deny care to a woman seeking an abortion or any other service they morally oppose.

…The Georgia state senate has passed a bill that would allow adoption agencies to refuse to place children with same-sex couples based on their religious beliefs. The bill would also prohibit the Georgia Department of Human Services from taking “adverse action” against such agencies.

Mike Pence was in Savannah on Saturday. The Georgia city hosted the South’s largest St. Patrick’s Day parade. He was expecting to see a lot of green as he marched in the parade, but he also saw a lot of rainbows.

…The Oklahoma House passed a bill yesterday that would allow adoption and foster care agencies to discriminate against parents whose lives violate the “sincerely held religious beliefs” of the agency.

…A new study led by a Belgian neurologist found that brain activity in transgender people resembles that found in cisgender people of their gender more than their sex assigned at birth.

…Investigators said that a 10-year-old child who died recently after years of physical abuse may have come out as gay just before he was killed.

The House Appropriations Committee on Wednesday passed an amendment allowing taxpayer-funded adoption agencies to deny LGBTQ families the ability to adopt a child based on religious objection.

…A gay couple from upstate New York were denied a marriage license by the town clerk and now even the Governor is getting involved.

A gay Trump supporter went viral after he had a racist hissy fit in a Lyft. Now he’s out of a job.

…Robert Ortiz and two friends got into a Lyft in New York City. Ortiz and his friends asked the driver, Shawn Pepas Lettman, to play their music, and he said no. They got into an argument and the driver pulled over.

…Noah and PJ are married now, but they shocked their wedding guests when it was time to take the floor for the traditional “first dance” as a couple.

…Scientists are speaking out against a directive by the Trump administration that has shut down research into a cure for HIV.