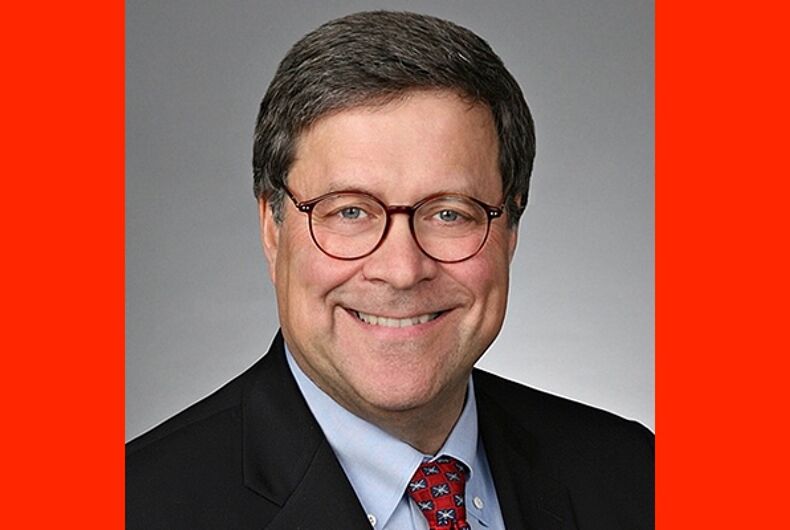 You can pretty much count on it every time another establishment Republican is tapped for a high-profile position. Despite a long track record of battling LGBTQ rights at every turn, a gay man emerges to say that the nominee is really a swell person.

The latest case in point is William Barr, President Trump’s nominee for attorney general. Barr has a history of homophobia second to none. He has written that law should flow “from God’s eternal law,” which means “restraining sexual immorality.” (In case you wonder whom he’s talking about, find a mirror.) He complained that landlords are forced to rent to unmarried couples.

So up pops Paul Cappuccio, a former general counsel for Time Warner, to sing Barr’s praises to the Washington Blade.

“There’s been no one who has been more supportive of my same-sex family than Bill Barr has, not only with my partner, with my children, for whom he’s ‘Uncle Bill.’ I know several people who are openly gay — who he has mentored — front and center,” Cappuccio said. “I was not open the entire time I knew him, but I was open a lot of the time I knew him.”

Cappuccio says that Barr’s past statements are no indication of how he’ll serve as attorney general. “He’s not going to ever let people be discriminated against, OK?” Cappuccio insists.

It’s great that Barr is so nice to Cappuccio’s family, but just because he was kind to a fellow Republican doesn’t mean he’s changed his tune and is suddenly affirming LGBTQ rights.

Moreover, Cappuccio isn’t exactly the most progressive advocate for LGBTQ causes. He worked under Barr in the George W. Bush White House, not exactly a haven for LGBTQ rights, and says that while marriage equality is a good policy he wouldn’t consider it a constitutional right.

Cappuccio is just the latest in a long line of gay men who step forward to reassure us that we should put more faith in their friendships with conservatives than in the conservatives’ actual records.

When Neil Gorsuch was nominated to the Supreme Court, Phil Berg, a friend and fellow Harvard Law School student, said Gorsuch “didn’t skip a beat” when Berg came out to him. Other gay men vouched for Gorsuch being a stand-up guy who was supportive of them and their relationships.

Of course, that’s not the Gorsuch we’re seeing on the Supreme Court bench. That Gorsuch has staked out a position as someone quite happy to limit LGBTQ progress.

Lest we forget, there were even people who stood up for candidate Donald Trump (although to be fair, Trump was more of a blank slate at the time). Abe Wallach, a former employee, told The New York Times, “I found him to be very friendly to my spouse. He would often ask about my spouse, how his dental practice was doing.”

Gay activist Rand Hoch recounted for the paper how pleasant Trump was when Hoch and his date would visit Mar-a-Lago decades ago.

We all know how that turned out.

The friends who vouch for the humanity of anti-LGBTQ conservatives differ from the crazy true believers like Milo Yiannopoulos, who are embracing a philosophy, not a candidate. They will justify anyone; Milo once said Pence was someone “I adore.”

Instead, the folks defending people with bad records are relying on their personal experiences. There’s no question that those experiences are true. The mistake is in thinking that just because someone is kind to you in person doesn’t mean his policies will be just as kind.

Then again if you travel in the kind of rarefied circles where you know future Supreme Court justices or attorneys general, you’re living a pretty privileged life. (Cappuccio made $16 million in 2016.) A wealthy former general counsel has a lot less to worry about than a transgender woman of color living in a small town.

Of course, that’s the kind of person who will bear the brunt of the dreadful policies that Barr, Gorsuch and their likes will be carrying out. So the next time you read a defense from a gay man about how personally supportive a conservative nominee has been, just remember: It’s the track record that counts.

Editor’s note: Story has been updated to reflect the fact that Donald Trump’s views on LGBTQ rights were uncertain during his presidential campaign and as such comments made about him at the time were in a different context. As noted in comments, Rand Hoch, who is referenced in the story, defends his LGBTQ and liberal credentials as “pretty damn good.”

This organization is supporting sex worker groups with philanthropic dollars