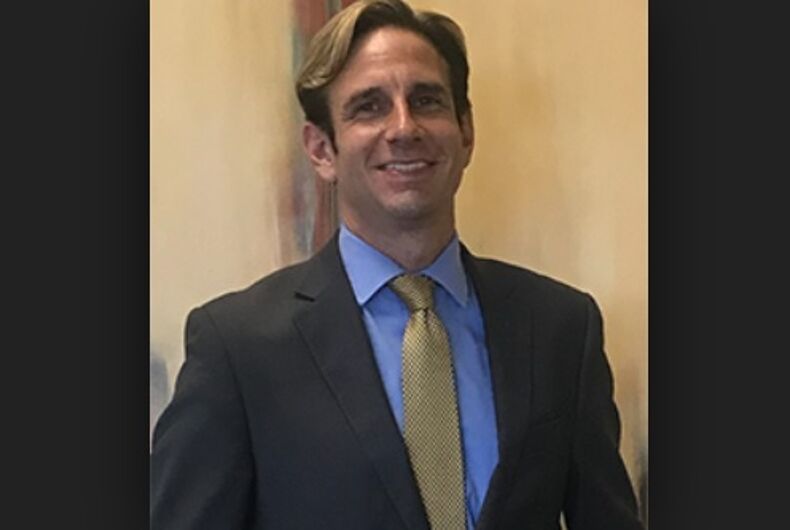 Republicans have canceled a hearing about the minimum wage after they found that an economist who was scheduled to testify once suggested that the U.S. “tax and regulate homosexual acts.”

And the economist, who wrote many homophobic blog posts in the early 2000’s, has since come out and started a family with another man.

Politico reports that Republicans on the House Education and the Workforce Committee canceled a hearing yesterday that was supposed to be about why the minimum wage shouldn’t be raised when they found that one of their expert witnesses, San Diego State University economist Joseph Sabia, had written numerous homophobic blog posts, as well as some sexist comments, in a blog he kept from 2001 to 2003.

The post that attracted the most attention was a 2002 post that calls for taxing homosexuality. While he wrote that it was a tongue-in-cheek proposal, the joke is homophobic. (The blog has been removed from the internet, but an archived version is still available.)

How can right-wingers defend against these attacks on activities that may cause bad health outcomes? I humbly propose that right-wingers attach an amendment to every bill that taxes or regulates tobacco or high-fat foods. The right-wing amendment should tax and regulate homosexual acts.

Homosexual activity has been responsible for devastating health outcomes — deadly HIV, hepatitis B, and various other sexually transmitted diseases. When two random men get together and choose to have sex, there is not an insignificant risk of infection and death. And if these infected men then go on to have sex with women, then you have women — and possibly children — who will be stricken with AIDS. Recent CDC reports indicate that an alarming number of gay men are unaware of their HIV status and that rates of unprotected sex are rapidly rising (in part due to gays’ belief that an HIV+ diagnosis is no longer a swift and certain death sentence).

In gay sex, we have an activity that is clearly leading to disastrous health consequences. What rational person would engage in this sort of activity? There is only one solution – let’s tax it.

That was written before the Supreme Court’s Lawrence v. Texas decision, so gay sex was illegal in a number of states.

That’s just one post. A 2003 post that responded to Lawrence v. Texas had the title: “Supreme Legislature Discovers Right to Sodomy.”

In that post, Sabia said that the decision was part of “the erosion of this republic’s founding principles” because it recognized that LGBTQ people have the same right to privacy as everyone else.

In another 2003 blog post, Sabia said it was “untrue” that gay high school students are targeted for bullying more than other teens. He did not cite a source.

Gay people weren’t Sabia’s only targets. In a 2002 post, he called women in college “unpaid whores” because, it turns out, young women have the audacity to enjoy sex nowadays.

But even in that post he managed to link it all back to the evil gays: “Recently, the behavior of young heterosexuals has begun to resemble that of gay men because young women are imitating men in their sexual promiscuity.”

The communications director of the committee that originally scheduled Sabia told Politico, “Members were uncomfortable moving forward on the hearing” when they saw the posts.

It turns out that Sabia’s blog posts may have been his own way of working through his internalized homophobia.

In an apology statement, Sabia said he’s “a gay man in a long-term, committed relationship and these charges of homophobia deeply hurt both me and my family.”

“I regret the hurtful and disrespectful language I used as a satirical college opinion writer 20 years ago,” he wrote in an email to NBC News. “My peer-reviewed professional work on veterans’ health, school shootings, discrimination against LGBTQ individuals, the opioid crisis, and the minimum wage are a more accurate representation of my more than 14 year career as an applied microeconomist.”

Indeed, he has authored or co-authored at least four papers since 2015 about labor economics and LGBTQ people, and they seem respectful and professional.

San Diego State University “unequivocally rejects any sentiment which seeks to undermine or devalue the dignity of any person based on their gender, orientation, ability, or any other difference among people which has been an excuse for misunderstanding, dissension or hatred,” the school said in a statement.

Representative Mark Takano (D-CA) called it “an absolute shame and a disgrace” that Republicans called Sabia in the first place.

“Instead of simply postponing this hearing — which would have been the first hearing on the federal minimum wage that Republicans have held in 8 years — my Republican colleagues on the Committee should have issued a strong rebuke disavowing this witness and let the hearing go on,” Takano said.

Ellen confesses she may quit her talk show. She’s sick of it.

3 blindfolded queer Mongolians asked for hugs on the street. Something amazing happened.