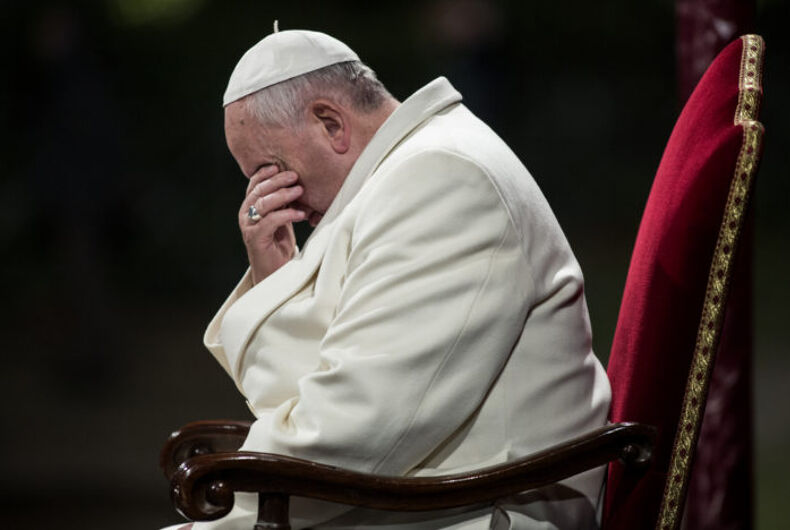 Pope Francis said that he was “concerned” that being gay is now a “fashion,” in a new book released on Saturday.

Francis attacks gay priests and nuns, saying that they shouldn’t join the clergy.

“The issue of homosexuality is a very serious issue that must be adequately discerned from the beginning with the candidates,” he said in an interview with a Spanish priest that was turned into a 120-page book entitled The Strength of Vocation.

“In our societies it even seems that homosexuality is fashionable and that mentality, in some way, also influences the life of the church,” he said.

Priests and nuns are required to be sexually abstinent, no matter their sexual orientation.

In 2005, priests with “homosexual tendencies” were barred from the priesthood unless they could prove that they were closeted and celibate for three years.

But Francis said that even that might not be enough.

“It can happen that at the time perhaps they didn’t exhibit [homosexuality], but later on it comes out,” he said.

“In consecrated and priestly life, there’s no room for that kind of affection. Therefore, the Church recommends that people with that kind of ingrained tendency should not be accepted into the ministry or consecrated life.”

He continued at length to admonish gay priests about celibacy, never mentioning straight priests, who also have sexualities.

“[We] have to urge homosexual priests, and religious men and women, to live celibacy with integrity, and above all, that they be impeccably responsible, trying to never scandalize either their communities or the faithful holy people of God.”

But if they can’t be “impeccably responsible,” it’s better that they stay away from the ministry.

“It’s better for them to leave the ministry or the consecrated life rather than to live a double life,” Francis said.

Francis has a mixed history when it comes to comments about gay people. Earlier this year, he suggested “psychiatry” for gay kids and, on another occasion, said that gay people can’t form families.

But the pope also allegedly said that god makes people gay and has made comments supportive of civil unions.

His stance on transgender people, though, has been consistently negative, calling transitioning the “biological and physical manipulation of sexual difference” and referring to being trans as a “choice.”

Trump’s latest con is that he just protected LGBTQ rights. He didn’t.