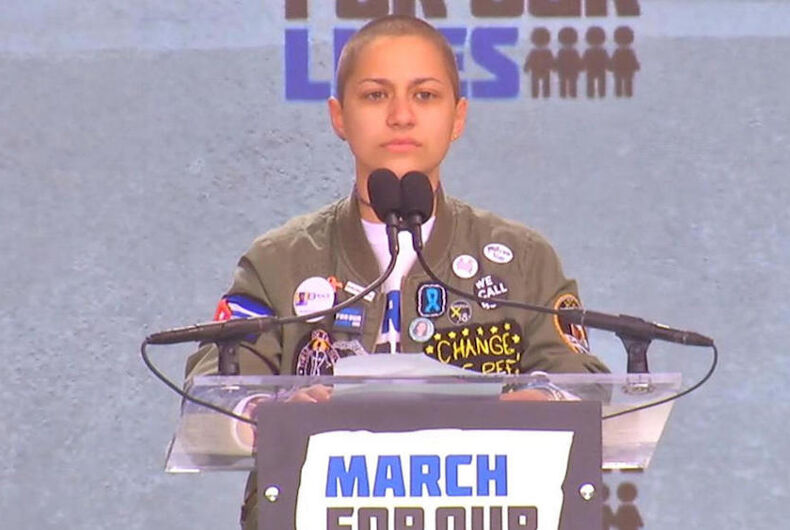 Time magazine had a large array of candidates for its prestigious 2018 “Person of the Year” designation. They chose “The Guardians and the War on Truth” including murdered and imprisoned journalists around the world who’ve dedicated their lives to exposing the atrocities perpetrated by dictatorial regimes.

Time wisely chose to highlight the courageous truth tellers. And by so doing, they shined further light on the brutality used to silence journalists like Jamal Khashoggi.

But while I fully support Time’s decision, I had hoped to see the young activists from the #NeverAgain firearms safety movement as Time‘s “Persons of the Year.”

“The people in the government who were voted into power are lying to us,” said Emma Gonzalez, a senior at Marjory Stoneman Douglas High School in Parkland, Florida. She excited the crowd at a Fort Lauderdale gun control rally just four days after a gunman plowed down her classmates and faculty with an AR-15 semiautomatic assault rifle. The gunman killed 17 and injured another 15 precious souls.

She continued, “Us kids seem to be the only ones who notice and our parents to call BS. Companies trying to make caricatures of the teenagers these days, saying that all we are self-involved and trend-obsessed and they hush us into submission when our message doesn’t reach the ears of the nation, we are prepared to call BS.”

Through her voice, passion, outrage, and deep commitment, Emma and her peers poured cleansing waters to wash away the deeply entrenched stain of gun violence.

#NeverAgain is a movement declaring that people are worth far more than corporate profits and political payoffs. It’s a movement demanding common-sense measures finally be taken to end the scourge of gun violence in the USA. It’s a movement proclaiming, clearly and forcefully, that condolences and prayers simply aren’t enough, and most importantly that ENOUGH IS ENOUGH!

While I’m usually the last to use sports metaphors, this new youth-led gun safety movement has really got the National Rifle Association’s leadership on the ropes.

As the #NeverAgain movement has challenged the NRA’s power, some private companies have decided to suspend their sponsorships and discount programs with the NRA, including First National Bank of Omaha, and Enterprise Holdings with its car rental subsidiaries Enterprise, Alamo, and National.

Related: Meet the group of gay “jesters” who lit the fuse for LGBTQ activism in the 1950s

The US stands at the cusp of great social change, led by strong, articulate young people who’re cutting through the BS of a system catering to the rich and well-positioned. And young activists are simultaneously emerging in other areas:

Women are pouring out into the streets and onto the ballots to break the logjam blocking their entry into the ranks of key policy makers. The #MeToo and #Time’sUp Movements are standing up and demanding an end to sexual harassment and gender inequality.

Disability Rights activists are sitting in and acting up to ensure quality health care for all and secure benefits to give people a dignified, high quality of life.

LGBTQ people and their allies continue to push for full equality and the freedom to enter public facilities most closely aligning with people’s gender identities.

Labor activists are demanding a realignment of the nation’s economic priorities to narrow the overwhelmingly and increasingly large gap between the haves and the rest of us.

Environmental activists are fighting to protect the planet and all living things from ultimate annihilation spurred by human-caused climate change. They’re demanding an end to fossil fuels and an increased reliance on clean, sustainable energy sources.

It takes courage to speak out and counter the violence, the scapegoating, the fear and resistance to change, as well as the ignorance and hatred surrounding our lives. Fortunately, young people are developing positive political identities at earlier ages than ever before. Activists of all ages are gaining selective electoral, legislative, and judicial victories.

Emma predicted this in her prophetic speech.

“They say no laws could have prevented the hundreds of senseless tragedies that have occurred,” she said. “We call BS. That us kids don’t know what we’re talking about, that we’re too young to understand how the government works. We call BS.”

Young people have been integral in the development and success of social movements from the very beginning, and today, they’re shaking up norms and traditions, just as youth from the past have always done.

We must stand with the courageous, intelligent, and articulate young people of the #NeverAgain movement for gun safety because they’re are poised to save our country from itself!

They are taking literally Albert Einstein’s warning that, “We can’t solve problems by using the same kind of thinking we used when we created them.”