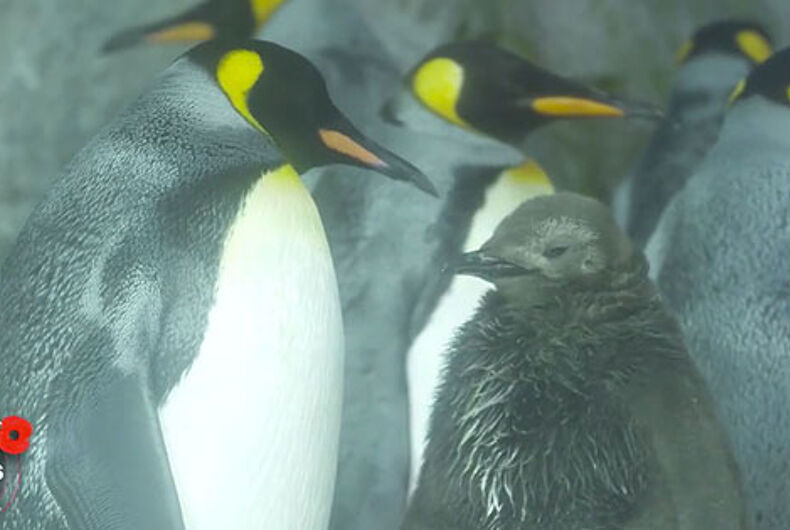 Thelma and Louise with their first chickPhoto: NZ Herald via Facebook

Thelma and Louise are a pair of king penguins who reside in Kelly Tarlton’s Sea Life Aquarium, located in Auckland, New Zealand – and this holiday season, the couple is expecting a little bundle of joy.

It was eight years ago that the pair of female penguins first met, and they’ve been exclusively together ever since. This is somewhat unusual among penguins, who often take on a new partner each mating season.

A year and a half ago, their keepers gave the couple a penguin egg after its birth mother was found to have difficulty caring for the egg after her partner left her. The pair cared for and raised the chick from that egg.

Now, Thelma has laid an egg of her own.

“They really enjoy having an egg – like any animal, they want to breed,” said penguin keeper Laura Seaman to Newshub.

Penguins will trade off on egg caring duties regardless of gender, with each switch off every three days or so. “Having the egg together is really good for their partnership as well.”

The egg raises questions, however: penguin eggs are fertilized when a male and female mate. As neither Thelma nor Louise are male, the father of this egg remains a mystery.

When penguins mate, there is “lot of courting behavior, singing to each other, chattering their beaks,” according to Walker. This behavior is followed by the penguins pairing off – but Thelma and Louise have remained together instead, with both taking care of the egg.

The penguin keepers are now waiting until early next year to discover if Thelma’s egg is indeed fertilized. If it is, they may be able to determine just who fathered the egg, and how.

The penguin pair are also around 25-years-old, which is unusual in king penguins. The average life span for the birds is between 15-20 years.

The best things to happen to LGBTQ people in 2018