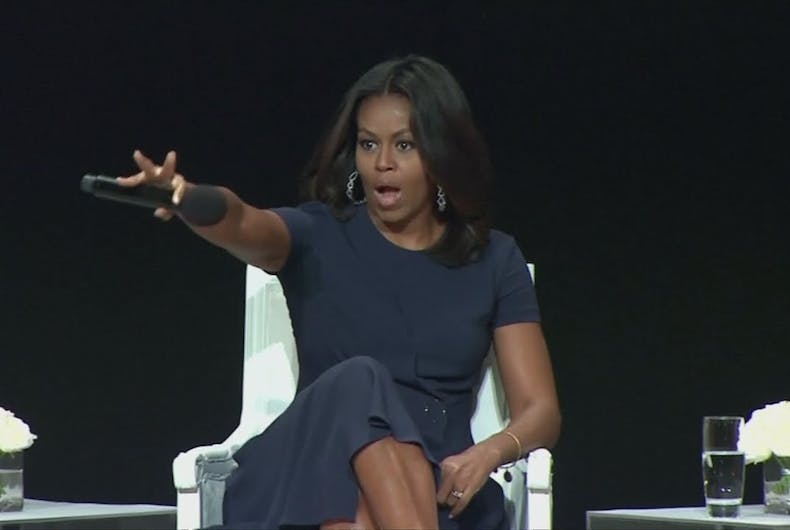 First Lady Michelle Obama swept into T.D. Garden at Beantown on Saturday as part of the national book tour promoting her memoir Becoming. The evening before the event, my spouse and I were gifted front row seats.

OMG! The event was simply magical, and the audience was wildly excited.

Michele Norris, a former NPR host, interviewed Michelle Obama. Michele and Michelle had a fabulous time lollygagging and laughing, making us all privy to their intimate conversation.

Michelle conveyed a universal message of hope. However, her message of self-empowerment to women (young and old) spoke a truth across generations, centering it as the theme for the evening. Walking into T.D. Garden, mothers had daughters in tow and both carrying their own copies of Becoming.

Michelle Obama’s concept of “swerve” is connected to one of her book’s many messages. The idea grabbed my attention, not only because of the delightfully relatable and meaningful way she conveyed the concept, but also from the examples she shared from her life.

“Swerve” is about embracing flexibility. “Swerve” is the ability not to be tethered to a perceived and rigid trajectory in your life. Rather, it’s about being open to life’s journey, and at times merely living in the question about what to do in your life. (And, do I know about the latter!)

“You’re not supposed to know at 20” what you’ll be for the rest of your life, Michelle told the audience. Michelle stated that we’ll have many lives and chapters in our lifetimes because we’re always discovering, evolving and journeying into our own “becoming.”

For example, Michelle shared with the audience that in her late teens and 20s, she had mapped out a straight and unerring path for her life — college, law school, job… — to achieve happiness and success. She disclosed, however, that she abhorred being a lawyer: Although it was one of many checkboxes on her achievement list, all the while she felt quite miserable.

Her candidness on the topic has inspired others.

“Being that Mrs. Obama’s path was not straight, it’s just been inspiring to know that my path may not be straight either, but I will be successful, “Alana Underwood, a senior at Berkley School of Music told The Boston Globe. Underwood was one of the 20 young sisters chosen as part of the Black Girls Rock program to visit with the former First Lady.

As in her promotional tour, the book takes the audience into the interior of her life: from a happy working-class childhood growing up in a multicultural community on Chicago’s South Side, through her Ivy League education, a plum job at a corporate law firm and to the White House. In both the book and her tour, she dispenses advice and inspirational self-help.

Michelle’s stop at the Boys and Girls Club of Dorchester was meant to inspire a future generation of young leaders who are often not thought as such.

“We were reading your book as if you wrote these stories about us,” a woman told her.

Also, both the book and the tour, reintroduces Michelle to the public.

Several biographies have been written about Michelle Obama, all by white men and women authors (except for Becoming and American Grown: The Story of the White House Kitchen Garden and Gardens Across America.) Their depictions of Michelle, while not intended to be damaging, were nonetheless stereotyped.

Deceased Caribbean American feminist lesbian Audre Lorde once stated, “If I didn’t define myself for myself, I would be crunched into other people’s fantasies for me and eaten alive.”

In the beginning years of Michelle’s tenure in the White House as well the time she spent on the campaign trail, she was typecast as an “angry black woman,” a racial trope for any sister who speaks truth to power.

For example, during the campaign trail, Michelle, candid and excited about the enthusiasm sweeping the country about Barack’s run for the presidency, was assailed by Republicans as unpatriotic and angry for a comment she made.

The comment came in response to what once seemed inconceivable — a black president the United States. Awed by the possibility, Michelle told a crowd before the Wisconsin primary, “For the first time in my adult lifetime, I’m really proud of my country.”

In reflecting on how her image was misconstrued, at best, or, intentionally maligned, at worse, Michelle told The Post, “I was female, Black and strong, which to certain people … translated only to ‘angry.’ It was another damaging cliché, one that’s been forever used to sweep minority women to the perimeter of every room.”

The book and tour reintroduce Michelle to us as a private citizen. She wrote the book to start a conversation with America about empowerment and healing.

While her tour will not reach everyone, she hopes the message in her book will, resonating with some unlikely people.

I think it has the potential to do so.