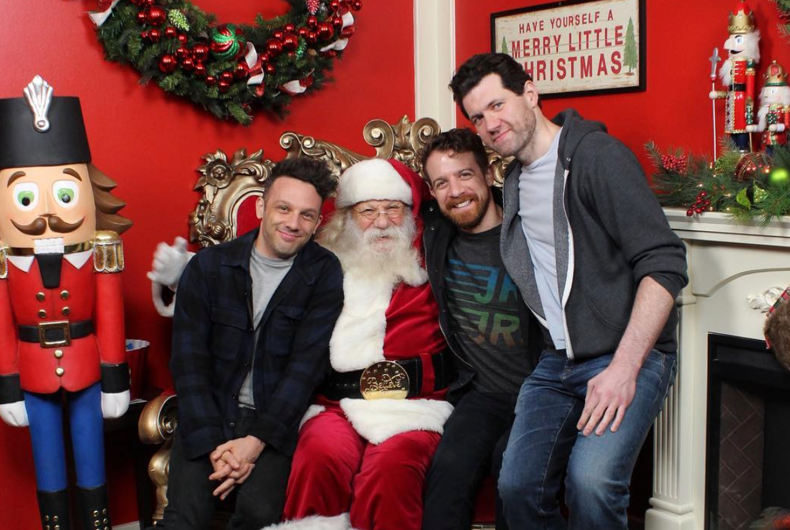 Billy Eichner and a gang of friends climbed on an older man's lap and asked him for "gifts."Photo: Instagram

We all know about the 12 days of Christmas. Well, here’s 12 famous queer people and accounts that are wishing us all a happy holiday in their very unique ways.

#1 Ryan Cassata gave us a song

Ryan Cassata is the bad boy with a heart of gold when it comes to trans musicians. He and his band gave a sweet pop punk version of “It’s Christmastime” to his fans. The song was originally written 50 years ago by George Danno Jr.

Ellen is giving her fans the ability to enter contests from home to win every giveaway the audience wins!

Kate Bornstein gave folks a re-interpretation of Genesis for Hanukkah.

Please come join me tonight @92Y for sabbath dinner. I’ll be speaking about how the authors of the Book Of Genesis warned us against binary thinking. And I hear it’ll be a yum dinner. Hope to see you there if u can make it. Good sabbath! ❤️ Auntie Kate https://t.co/HOfzyaFGRr

#4 Queen Latifah’s dog is out and proud

He’s on the nice list and he doesn’t care that you know he believes in Santa Claus.

The Paragon Collective has released a four episode installment of a holiday scripted musical comedy podcast. The First Mrs. Clause is the creation from radio/podcast host and RuPaul sidekick Michelle Visage. Visage plays the title role, Santa’s first wife, on trial for his murder, with a cast including Kristin Chenoweth, Lewis Black, Ru, and Nancy Grace.

“The story of SANTA CLAUS is a simple way to teach young people about karma and speak to the duel reality that we live in,” said RuPaul. “This is a fun way to keep the storyline going and put our spin on all of it.”

DON'T MISS the FINALE of The First Mrs Claus out now! Thank you all for coming on our camp musical Christmas journey with us! Long live Hot Coco! MERRY MERRY MERRY CHRISTMAS 🎄

Aydian has not only been sharing his experience as a first time parent on social media but he’s also been showing us how it feels to be a Dad during the holidays! Also, he named his kid Antler! How cute is that?

Griffy, of the very sexy Rick and Griffy duo, will make you sweat on the coldest winter day.

#8 Janelle Monae is selling sweatshirts or something

She wants to remind us that we all deserve some Dirty Computer merchandise!

The group reminds us how important harm reduction is during the holidays (and always).

#11 Meshell Ndegeocello gets down to basics

I think many of us can agree with her on this one!

I only really like the tree and light part of this event.

Santa’s final visitors tonight. Yes I shaved and I hate it. 🎅🤶🌈

He also reminds us every year that screaming at people during the Christmas season never gets old.

The Amy Poehler Christmas Carol Ambush! A Billy on the Street holiday classic! Link in profile! 🎅🤶