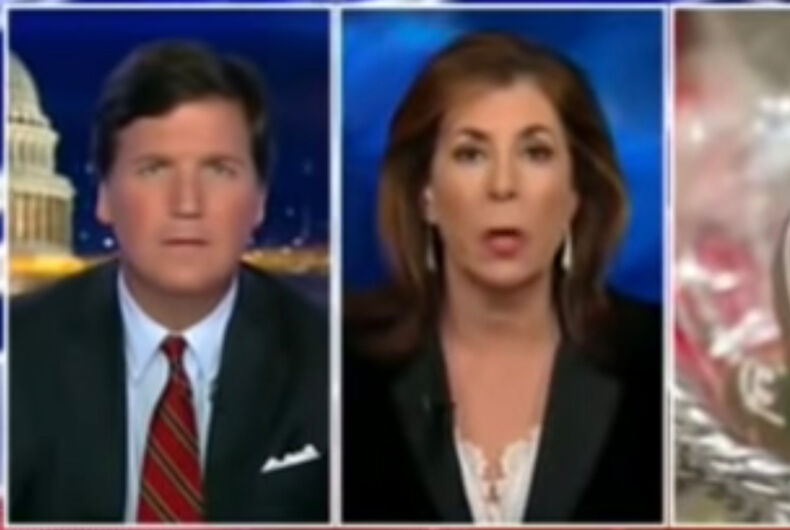 President Donald Trump claimed victory against anti-holiday forces in the ongoing war against Christmas in 2017, falsely claiming that people could once again say “Merry Christmas.” Not that anything was truly stopping them before last year.

Now, a new front has opened up in the war. Not content to ruin potentially sexist holidays songs of the 1940s, this time the yuletide threat comes wrapped in gender identity.

Radio host and political commentator Tammy Bruce, who was driven out of the National Organization for Women in 1996 after she made “racially insensitive comments” during the trial of OJ Simpson, spoke out on Tucker Carlson Tonight.

She claims that a Scottish coffee shop selling “gingerbread people” is “the tipping point” when it comes to policing free speech.

“I contend, after a series of living your entire life being kind of bullied into what you can and cannot say and presumptions that you’re bad people, that it can be the smallest thing that tips you over the edge,” said Bruce, acknowledging that even her own stance was seemingly ridiculous.

Bruce did acknowledge, however, that it was hard to tell the gender of a cookie, noting that, “I couldn’t tell, obviously, because they’re also not wearing clothes. So, it’s hard to say what they are and what they’re doing and not doing.”

Most gingerbread cookies lack external genitalia and secondary sexual characteristics, such as body and facial hair, but the move by the Scottish Parliament, affecting a coffee shop located in the building, was to help “stamp out sexism” and apparently provide a level playing field for non-masculine cookies.

Sexual harassment has been an issue in the Scottish Parliament building, with 30% of the women working in the building stating that they’ve been sexually harassed. It was this statistic that drove the coffee shop to rebrand their gingerbread as a symbolic gesture of solidarity.

It is worth noting that many in the Scottish Parliament have criticized the move, feeling that the change trivializes the importance of speaking out against sexual harassment by doing little more than changing the name of a cookie.

Bruce and host Tucker Carlson saw broader implications in the move, however, with the latter quipping that, “maybe the lesson is that the rest of us shouldn’t participate in our own spiritual neutering, and we should say every step of the way that we’re not complying. Call HR on me, I’m not doing it.”