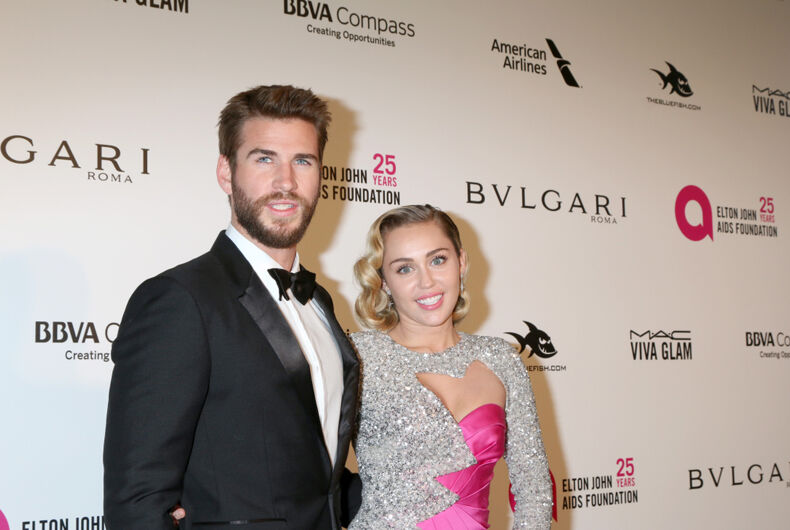 The 26-year-old “gender-neutral, ­sexually fluid” singer posted several pictures of themselves wearing a wedding dress and embracing Hemsworth, a 28-year-old clad in a suit and tie.

The two first met in 2008 on the set of The Last Song, a teenage coming-of-age romantic comedy. They began dating and got engaged in 2012 but called it off in 2013, remaining broken up for three years afterwards.

During a 2016 interview with Ellen DeGeneres, however, Cyrus confirmed getting back with and re-engaged to Hemsworth.

They reportedly married in a small private ceremony in Nashville, Tennessee. Cyrus posted the following images and a video of their small wedding celebration on Twitter and Instagram.

Cyrus has long spoken in favor of marriage equality and about their sexual fluidity and gender neutrality. Cyrus had a “faux lesbian lip lock” with a woman on the reality TV competition Britain’s Got Talent in 2010. Cyrus then got an equal sign marriage equality symbol tattooed on their ring finger in 2011.

Cryus celebrated Pride month at Facebook headquarters in 2013 and was banned from the Dominican Republic for “inciting lesbian sex” through their music in 2014. But their LGBTQ activism really ramped up in 2015.

That same year, Cyrus launched the Happy Hippie Foundation to help homeless and LGBTQ youth, attended the American Foundation for AIDS Research’s sixth annual Inspiration Gala with a “queer, biracial, agender” date, and performed with drag queens from RuPaul’s Drag Race at the end of the MTV Video Music Awards.

Hemsworth isn’t as vocally queer, but is still an open-minded ally. In a 2017 interview, Cyrus said that Hemsworth doesn’t like being identified as a “straight guy.” He has also spoken in favor of marriage equality in his home country of Australia.

A trans teacher got PTSD after years of harassment & a rape threat. Now she’s suing.

70 French celebrities got together to record a song about homophobia