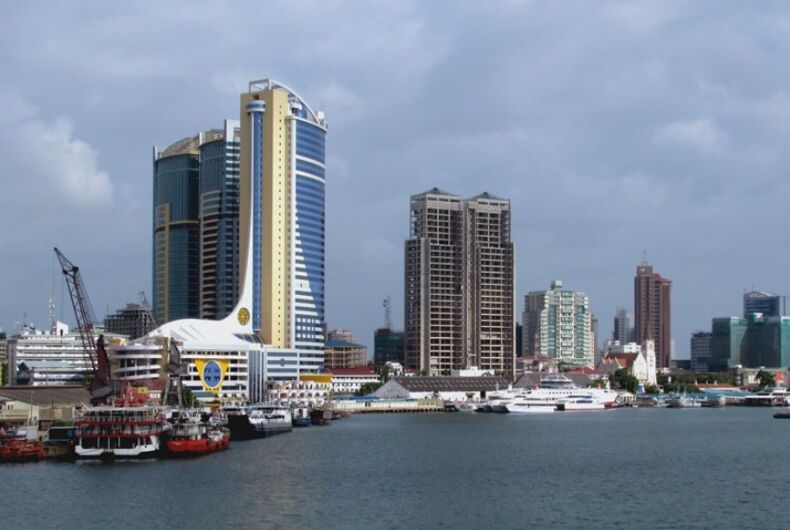 The economic capital of Tanzania, Dar es Salaam, has been the epicenter of the country's crackdown on LGBTQ people. Photo: Wikimedia Commons/David Stanley

Gay people are fleeing Tanzania in fear of police as the government cracks down on homosexuality.

Joseph Omar, a 28-year-old gay man from Tanzania, talked to a reporter with Religious News Service as he was crossing the border into Kenya at the town of Isebania.

“The gay community is very scared because police are breaking into homes of suspected homosexuals and arresting them. I don’t want to be the next person. I’m going into hiding.”

Omar said he had to plead with authorities to get into Kenya and tell them that he didn’t choose to be gay.

“I didn’t choose to be gay, and God knows,” he said. “I will go back to my country when the situation calms. I don’t want to die or be jailed.”

Homosexuality is a felony in Kenya, a country where 96% of people believe that homosexuality should not be accepted by society, according to a 2007 Pew Global Attitudes Project survey.

But the situation in Kenya isn’t as bad as in Tanzania. Since John Magufuli, a devout Catholic, got elected president in 2015, arrests of LGBTQ people have increased.

Paul Makonda, the governor of Dar es Salaam, is an ally of Magufuli. Last month, he called on residents to turn in people they suspect might be gay.

“Give me their names,” he said. “My ad hoc team will begin to get their hands on them next Monday.”

“We are worried about both those who are known to the community and those who are closeted,” an LGBTQ activist told CNN. Their name was not published out of fear for their safety.

But they are planning to stay in Tanzania.

“I have to help people who are in hiding,” they said.

“The government needs to stop this harassment. We are, after all, all citizens of Tanzania.”