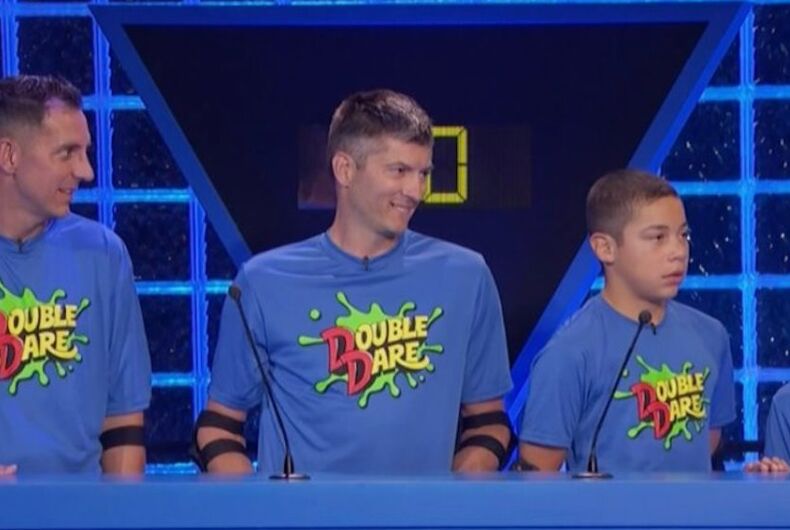 The show’s host, actress and YouTuber Liza Koshy, announced the family by stating, “They love football and they love each other… That’s right — it’s about time we had double dads on Double Dare!” Liberty told Koshy that he goes by “papa.” Bryan said he goes by “dad.”

Double Dare has been one the network’s most popular shows of all time. It features two teams who “dare” or “double dare” one another to answer trivia questions. If a double-dared team can’t answer a question, they can attempt a physical challenge, usually a messy stunt involving food, water or slime.

The team with the most points after two rounds proceeds to an ultra-messy obstacle course of eight obstacles under 60 seconds, winning cash and prizes along the way.

Double Dare originally ran from 1986 to 1993 with a short-lived reboot in 2000 and several live US tours. Its most recent incarnation began in Pride Month 2018 and has received positive reviews as fun, lighthearted family entertainment.

This isn’t the first time Nickelodeon has featured a same-sex family though.

In 2016, they made network history with their first-ever portrayal of a same-sex male couple on their animated series The Loud House. In the clip below, the two fathers humorously say goodbye to their son at a friend’s sleepover.

The network also featured a younger unmarried female same-sex couple in the 2014 conclusion of its animated action series Avatar: The Legend of Korra.

These representations are big deal considering that Nickelodeon has an estimated 1.186 million viewers. Granted, portrayals of different-sex couples continue to dominate the network, but it’s still an important step forward for mainstream visibility and acceptance of same-sex couples among younger viewers.