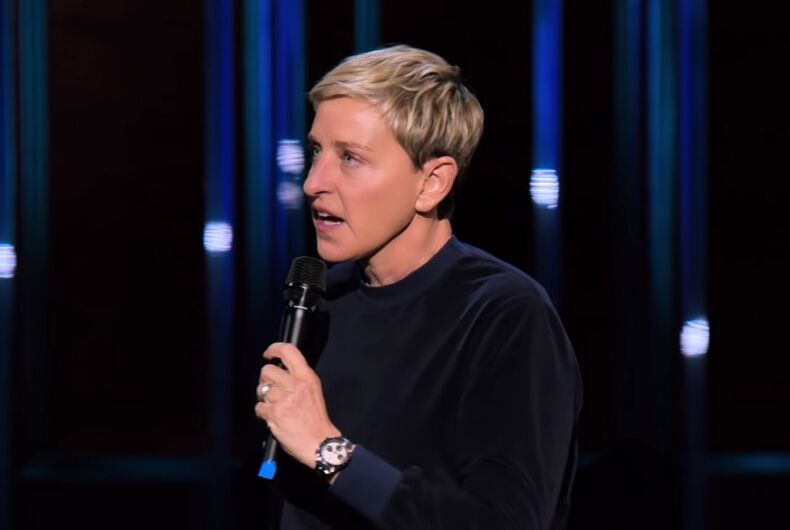 The Ellen Degeneres Show, which has been running for 16 seasons, is starting to feel restrictive to her.

“The talk show is me, but I’m also playing a character of a talk-show host,” Ellen said. “There’s a tiny, tiny bit of difference.”

She has already extended her contract until the summer of 2020, and she sounds conflicted about what to do. She’s not in a rut exactly, but she is stuck doing one type of comedy.

For example, after one of her shows that included a segment with a six-year-old girl singing a duet with her father about love, Ellen said she thought she would say, “That was adorable and … and … and… really, really creepy.”

But that’s not the kind of joke that works on The Ellen Degeneres Show, and she was worried about hurting the kid’s feelings, so she didn’t say it.

Ellen has recently returned to stand-up, where she curses and talks about how her wealth has changed her, things that don’t work in the medium of daytime talk.

Fellow comedian and personal friend Tig Notaro said, “Being trapped in the world of being asked to dance and expected to be nice, it’s real.”

“I’m sure there’s people who think she’s kidding. Or can’t have a bad day. But she does. It’s an interesting pickle she’s in.”

Ellen herself said that she’s sick of strangers asking her to dance. “There’s been times someone wants a picture, and while I’m doing a selfie, they’re like: ‘You’re not dancing!’”

“Of course I’m not dancing,” she said. “I’m walking down the street.”

Ellen’s wife Portia de Rossi is encouraging her to end the show.

“I just think she’s such a brilliant actress and stand-up that it doesn’t have to be this talk show for her creativity,” de Rossi said. “There are other things she could tackle.”

“I don’t see the end of her show as her career ending,” she added.

But her brother Vance Degeneres, who is also a comedian, who said that the country needs her positivity right now and is encouraging her to stick with the talk show.

Her return to stand-up will air as a Netflix special entitled Relatable, a comment about how her wealth has made her less so.

“It was interesting to me that I was more relatable when I was closeted and dishonest than when I came out,” she said.

Relatable will be released on December 18.

Republicans uninvited an economist who called for a gay tax. It turns out he’s gay.