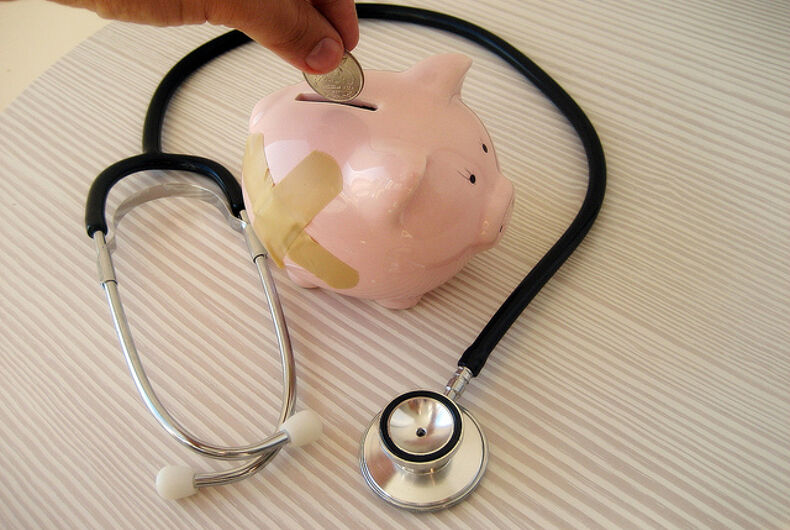 Everyone knows that a lot of conservative evangelicals prefer to live in a bubble. How else to explain the emergence of a Christian airline. (Don’t look for cocktails on your flight.)

So it’s no surprise that there is a growing market in Christian health care plans. Except they don’t call themselves insurance. They’re ministries. And they are as anti-LGBTQ as you might imagine.

Altogether, the ministries cover more than a million Americans. While not all are geared toward evangelicals, the bulk of them are. Thanks to a fluke in Obamacare, the ministries don’t have to adhere to any of the regulations that govern the rest of the insurance market.

That means picking and choosing who gets insurance and what gets covered, based on the ministries’ definition of Biblical standards. Many of the ministries only accept applications from evangelicals.

As for LGBTQ people, forget it. Medi-Share, one of the largest ministries, states that members have to “live by Biblical standards” and “must only engage in sexual relations within a Biblical Christian Marriage.” It also requires members to attest that they do not drink or smoke and attend church regularly.

Some ministries require you to attest to your condemnation of marriage equality.

The Biblical standards mean that the ministries won’t cover any issue that arises from what they deem sinfulness, like pregnancy outside of marriage or a sexually transmitted disease.

More broadly, though, the ministries won’t cover pre-existing conditions. They often have limits on preventative care and on prescription drug coverage, leaving members to shell out money from their own pocket.

The ministries make a point of saying that they are not insurance, although they are certainly functioning in the market as if they are. They also play heavily on the faith of prospective members. Medi-Share promotes that joining means you are part of “a community of members supporting you in prayer.”

Still, the ministries are doing what insurance plans did prior to Obamacare: cherry pick and then look for every reason not to pay for care.

As a result, the plans appeal to conservative Christians looking to save money, because they are generally less expensive than comprehensive health plans. Their lower costs are the result of having healthier members and tight restrictions on what they will pay for.

If you don’t plan on getting sick, the plans can look like a good deal. It’s when something goes wrong that you find out otherwise.