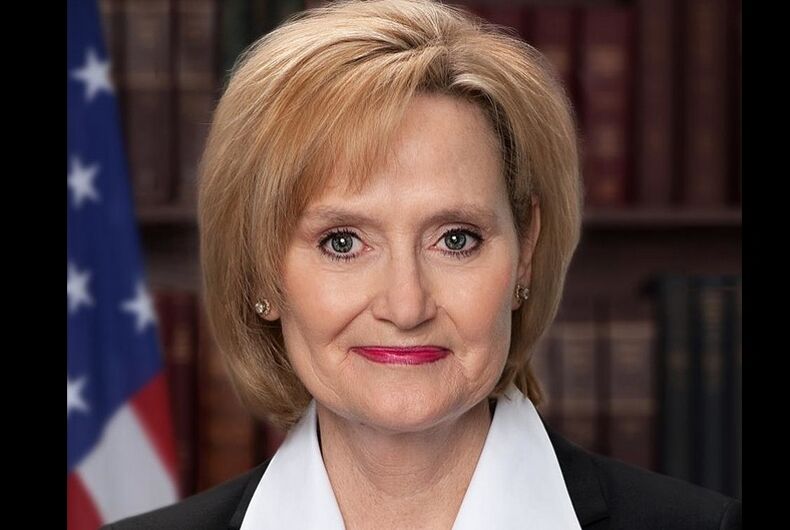 Cindy Hyde-Smith (R) has won the runoff election for U.S. Senate in Mississippi.

Earlier this month, Hyde-Smith and Mike Espy (D) were the top-two finishers in the special election to replace Thad Cochran (R), who resigned in April due to health issues. Neither candidate got more than 50% of the vote, which triggered a special election.

Hyde-Smith has close ties to Donald Trump, who tweeted to congratulate her last night.

Congratulations to Senator Cindy Hyde-Smith on your big WIN in the Great State of Mississippi. We are all very proud of you!

Hyde-Smith’s campaign website describes her as a “rock-solid conservative.” The site doesn’t mention LGBTQ issues, but she has previously said that marriage equality goes against her “personal and religious beliefs.”

With the help of the Southern Poverty Law Center, the women wrote a letter of complaint and then were allowed to have the commitment ceremony there.

This didn’t sit well with Hyde-Smith, who “strongly objected” to the ceremony and asked that state law change to provide “clear and straightforward definitions about what activities can take place on the property owned by the State of Mississippi.”

“While this same-sex couple’s request for a permit to utilize one of our state’s facilities for a ‘commitment ceremony’ is not being defined as a marriage ceremony, it is personally troubling for me,” she said at the time, citing her “personal and religious beliefs.”

Hyde-Smith is the first woman elected to Congress from Mississippi.