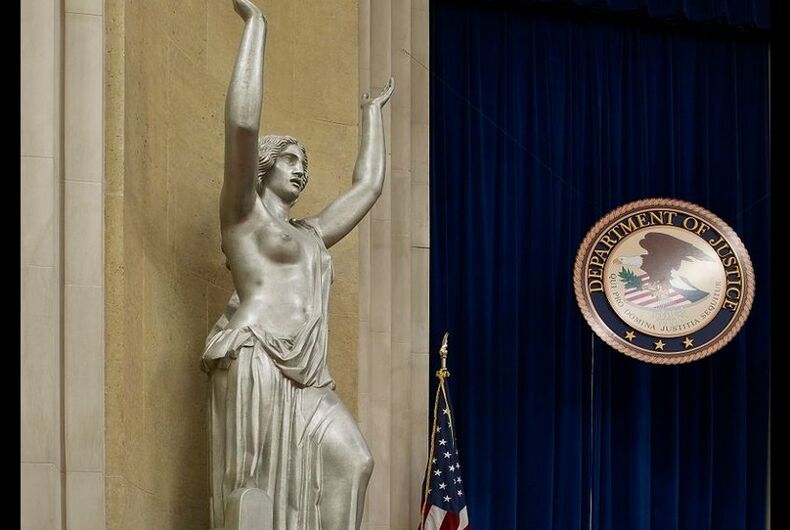 A transgender woman is suing the city of Chicago for not allowing her to appear topless at a bar.

Bea Sullivan-Knoff, 26, is a performance artist who has used nudity in her shows in the past.

But in 2016, she tried to schedule a show at a venue in Chicago, but was told that she couldn’t appear nude because of a city ordinance that prohibits nudity in establishments that sell alcohol.

What’s more, she couldn’t even appear topless – a compromise she suggested – because the ordinance defines showing “female breasts” as nudity.

Her argument is, first, that allowing men to go topless in bars but not women is sexist discrimination. The only reason the ordinance only bans women from going topless is because society treats women’s bodies as sex objects – breasts aren’t, in and of themselves, any more sexual than men’s chests.

Second, she says that the ordinance is unconstitutionally vague, because “female breast” isn’t clear when it comes to trans, intersex, and non-binary bodies.

“Stating ‘female’ and assuming we can all understand whether that applies to us doesn’t work when you start to look at trans and intersex folks,” Sullivan-Knoff said.

“You can find so many different kinds of bodies tied to those two gender markers. The diversity gets lost when you just say it’s either an ‘F’ or an ‘M.'”

U.S. District Judge Andrea Wood has already allowed Sullivan-Knoff’s suit to go forward: “At minimum, these questions pose serious concerns in the abstract, as nothing in the text of the Ordinance provides a clear answer.”

These questions have come up before, when several transgender women in Delaware allegedly went topless at the beach in 2010 and someone called the police.

Chicago’s attorneys argued that the ordinance treats women differently because women’s breasts “create a sexual environment” and because the city has a legitimate interest to “combat the secondary effects resulting from the combination of nude and semi-nude dancing and alcohol consumption.”

Of course, they could accomplish that goal by banning everyone from going topless, or they could fight those “secondary effects” directly.

“The city is relying on societal conventions because that has worked in the past and has been enough to justify these types of laws,” Sullivan-Knoff’s lawyer told the Chicago Tribune. “But as society has evolved, the law is slowly but surely, I hope, evolving to catch up.”