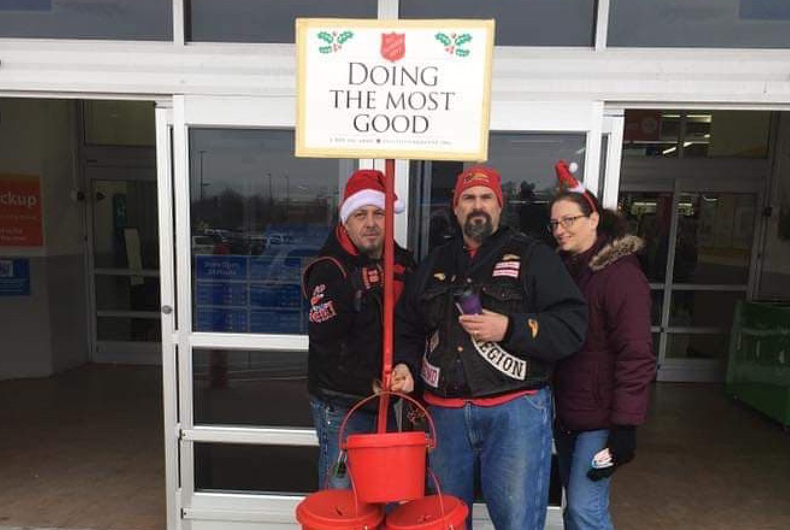 The Salvation Army has another scandal on its hands.

The Hell’s Angels Northwest Indiana Region Motorcycle Club manned the kettles over the Thanksgiving holiday weekend and a social media post about it went viral on Facebook before being taken down.

The post showed members of the group ringing bells while wearing patches that read “Aryan” and “WAR” (White Aryan Resistance). The man wearing the WAR patch has been identified as “former” skinhead Jeremy Robinson, the founder of the now-defunct Outlaw Hammerskins.

Related: Here’s a voucher you can drop in a Salvation Army bucket to stand up for LGBTQ rights

A Walmart representative said that store management asked the group to leave after customers pointed out the white supremacist patches.

One woman who was with the group at the time, Heather Pemberton, started responding to comments on the post to defend the group.

“That’s the profiling bullshit we all have to deal with all the time you’re no better than anybody else,” she wrote in one response. “What you all are doing is a form of bullying. And profiling,” she said in another.

“That’s not what our clubs [sic] is about,” a representative from the club sent to the NW Indiana Times. “However like all Americans, we love exercising our freedom. Sometimes freedom means you see and hear things you may not like. We accept that.”

“The focus of today has nothing to do with freedom though. It has to do with charity and sacrificing for you community. I’d suggest to those making negative comments that maybe a little less time should be spent exercising your freedom of speech and a little more be spent to making a positive difference in our society.”

The Salvation Army did not respond to a request for comment by publication.