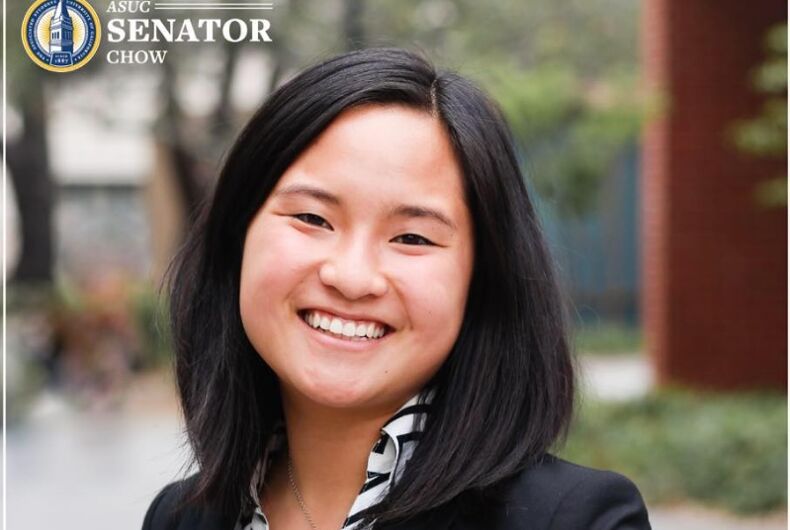 A student senator at the University of California Berkeley is facing pressure to resign after making transphobic and homophobic statements.

Isabella Chow, 20, has come under fire for comments she made about a bill to condemn the Trump administration’s plan to rescind Title IX protections from transgender people.

Several weeks ago, the Queer Alliance Resource Center (QARC) at UC-Berkeley asked the student government to pass a bill condemning the Trump administration for the leaked Department of Health and Human Services memo that laid out plans to change the legal definition of gender to sex assigned at birth, effectively erasing transgender and nonbinary identities.

Since the memo would affect the enforcement of Title IX of the Education Amendments Act of 1972, they believed it was appropriate for a university to speak out on the issue.

Chow abstained and issued a five-paragraph statement explaining her abstention.

“As a Christian, I personally do believe that certain acts and lifestyles conflict with what is good, right, and true,” Chow wrote. “I believe that God created male and female at the beginning of time, and designed sex for marriage between one man and one woman.”

“Where this bill crosses the line for me is that I am asked to promote a choice of identities that I do not agree to be right or best for an individual, and to promote certain organizations that uphold values contrary to those of my community.”

“She could have merely abstained,” said QARC president Regan Putnam. “But she took it upon herself to go into this long dialogue, talking about marriage between a man and a woman, and shrouding hate in ‘love.’ Nobody asked her to explain her vote. Nobody who voted ‘yes’ had to explain their vote.”

Chow’s political party, Student Action, cut ties with her hours after she published her statement.

The student newspaper Daily Cal also rejected an op-ed she wrote that further explained her position, saying that it “utilized rhetoric that is homophobic and transphobic by the Daily Cal’s standards.”

Now Chow is sad that people dislike her.

“I go to classes, and people are looking at me,” she told the San Francisco Chronicle. “I’ve been painted in such a negative light. Everybody’s talking about it. No matter how much I tried to say, ‘I can love you and still disagree with you,’ people still interpret my disagreement with being a bigot and a hater.”

This past Wednesday’s Senate meeting was packed. A huge banner saying “Senator Chow Resign Now” was hung in the back of the room.

For three hours students talked about how “disagreeing” with someone’s identity is the definition of bigotry. Others talked about being Christian and accepting LGBTQ people.

“I am Christian. I am queer. And I am ‘good, right and true,’” said one student. “And I demand Senator Chow to resign!”

Someone read the names of transgender people who were killed by people who “disagreed” with their identities.

A couple students supported Chow. One said, “Senator Chow’s statement never implied any harm to the LGBT community. I support Senator Chow and ask her to remain strong and not resign.”

She has no plans to resign, saying that “no one else” will represent a point of view that is “ignored and misunderstood on campus.”

In light of recent events and expressed confusion regarding what was said last week in Senate, I would like to share a verbatim transcript of my statement before the roll call vote. Read it for yourself: