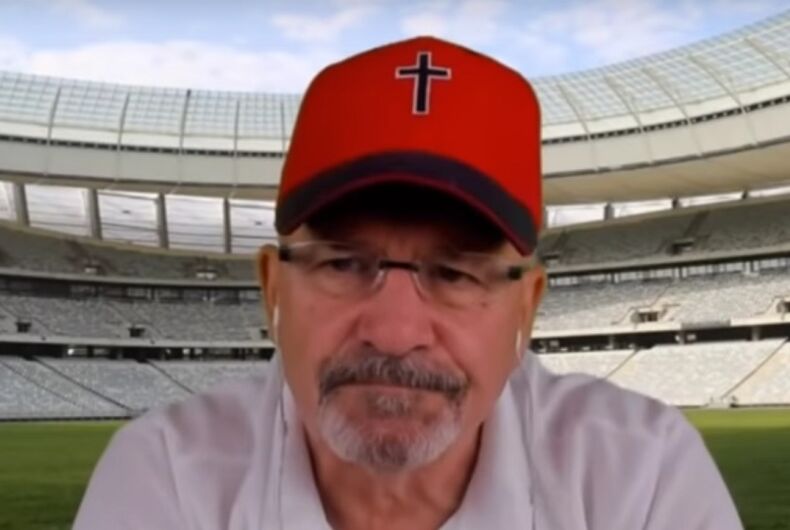 "Coach Dave" puts a stadium background on his webcast.Photo: Screenshot/YouTube

Religious right activist Dave Daubenmire, who goes by “Coach Dave” online, made some homophobic and misogynist comments about lesbians.

Daubenmire, while discussing a trip to Walmart, said that he discovered that not everyone is attractive.

“There are a lot of unattractive people in the world,” he said, as if this were the first time he paid attention to anyone besides himself when out in public.

Suddenly he had what he thought was a novel explanation for why some people are gay: they’re just too ugly to be straight.

“I don’t wonder if some of this… Especially in women… Some of this homosexuality stuff going on…” he said.

Because straight people are always the most beautiful people in the room, including Coach Dave, who will never turn gay because he’s just such a studmuffin.

In 1999, the ACLU filed suit against Daubenmire, who was then a high school coach, for leading prayers in the locker room of a public school.

In 2012, he was fired from a Christian school for being “too divisive.”

He started his webcast and got attention for his hateful rhetoric, like saying that public school students are being educated by “homosexuals, fornicators and defiant haters of God.”

Daubenmire frequently attacks how American children are being “sissified” by efforts to stop bullying, which he says is the “homosexual agenda, to try to get people to not criticize or make fun of or poke fun at homosexuals.”

He also runs Pass the Salt Ministries which organizes “spiritual boot camps” for men with the slogan “Real Men Under Construction.”

In 2014, he did not get a job as a coach at an Ohio public school because of his years of hateful and pro-bullying rhetoric.

On his webcast, Daubenmire has said that teen girls who aren’t ready to have sex with their boyfriends are committing sexual assault, told Rachel Maddow that she doesn’t “even know that you’re supposed to love a man,” and ranted about chemtrails.

Here are the 15 dumbest theories about what makes people transgender