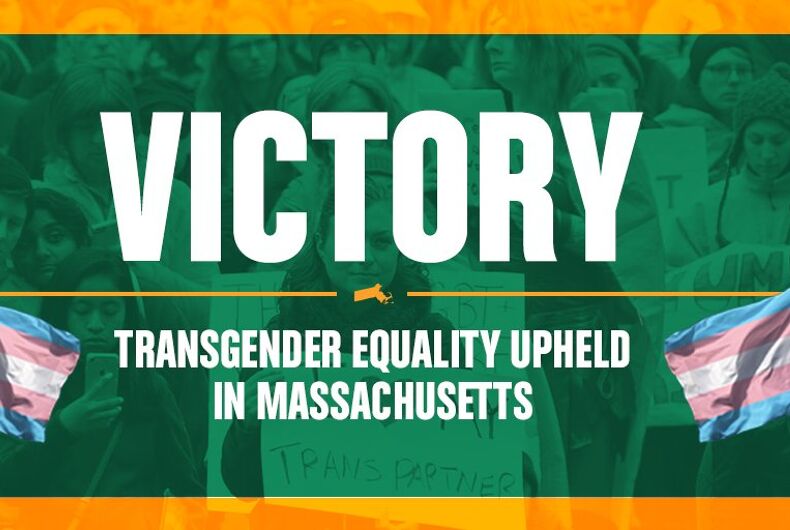 Yes on 3 forces announced the victory on Twitter, noting it is the first-ever statewide win in support of transgender rights.

VICTORY: #Massachusetts votes #YesOn3 to uphold dignity and respect for our #transgender neighbors! Together, we've secured the first-ever statewide victory for transgender protections at the ballot box. pic.twitter.com/wPTwaWuGQj

Governor Charlie Baker signed the law in question, titled, “An Act Relative to Transgender Anti-Discrimination” in 2016.

The battle over Question 3 was largely viewed as a “test case” for similar fights nationwide, as opponents of LGBTQ rights look at transgender people as their newest battleground. A victory for Question 3 could have led to similar ballot initiatives nationwide.

A similar referendum took place in Houston, Texas with the victory of Proposition 1 in 2015. In that case, the Houston Equal Rights Ordinance (HERO) was struck down by voters, with the issue of transgender bathroom access being a key point pushed by opponents of the ordinance.

That bill included more than transgender rights and was a huge loss for the entire LGBTQ community.

Since Massachusetts was the first state to allow same-sex marriage and is largely politically liberal, the fight over Question 3 was a big target for those on the right seeking to overturn LGBTQ rights.

Many were concerned that the wording of Question 3 would be an issue. A “yes” vote for question three would keep the ordinance as is, while a “no” vote would have repealed it.

No on 33 campaigners used similar arguments as those seen in previous fights against transgender rights, claiming that the law will allow sexual predators access to women’s spaces, or might violate privacy.

In spite of arguments by No on 3 forces, the law had not led to any issues in restrooms or other locations.

Mara Keisling, executive director of the National Center for Transgender Equality, celebrated the victory, saying “Massachusetts has set a clear precedent for every state and territory: When anyone comes for our rights, we and our allies will fight back and we will win. We will not be bullied and we will push against every myth and lie spread in the name of hatred.”

“Particularly under a presidential administration hostile to the rights of transgender people, victories like this are all the more important. No transgender person should have to live their life in fear of prejudice, and we will always fight to protect strong, clear laws supporting our rights as full members of society.”

“By winning the first statewide popular vote on transgender rights, Massachusetts voters reaffirmed our Commonwealth as a place that fiercely defends our basic values of dignity and respect for everyone. When Massachusetts leads on equality, the nation watches – and often, it follows,” Carol Rose, executive director of the ACLU of Massachusetts, said.

“Tonight, we sent a message not just to transgender people and their families and friends here in Massachusetts, but to the entire country. At a time when transgender rights are being threatened nationally, we absolutely must preserve the rights we have secured at the state level.”