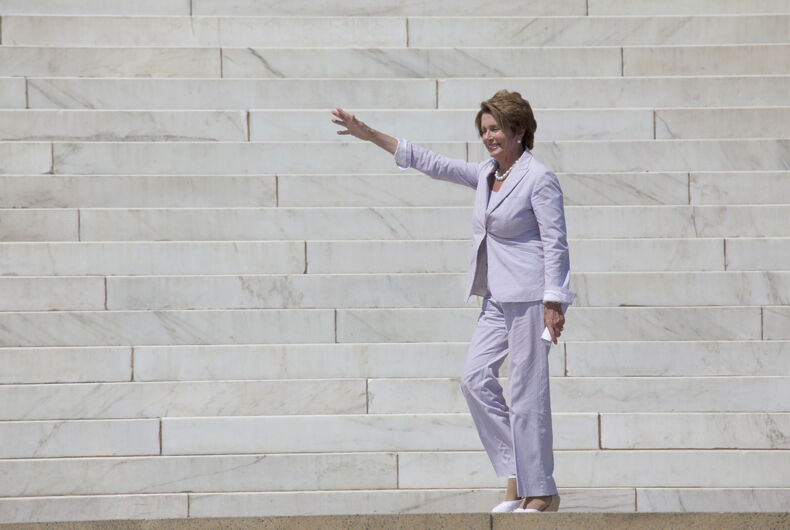 Congresswoman Nancy Pelosi at the 50th Anniversary of the march on Washington and Martin Luther King's I Have A Dream Speech, August 24, 2013, Lincoln Memorial, Washington, D.C.Photo: Shutterstock

What began as my attempt to encourage and gauge public opinion on a small scale turned into something rather different. On my Facebook page and on several Democratic Party group pages, I wrote:

“Nancy Pelosi is smart, experienced, and effective! Let her do her work as Speaker of the House!!!! What’s the big whoop?”

People who supported my assessment were many, quite possibly the majority of respondents. They raised many issues. Experience, consistency, effectiveness, loyalty, and unity among Democrats were consistent themes.

But a recurrent theme emerged centering on Nancy Pelosi’s age.

“Her attitude right now reminds me of many people in my place of employment who are her age, constantly proclaim “I’m NEVER going to retire! 😄😄” and have kept qualified and eager individuals from pursuing opportunities and being built as the next generation of great higher ed professionals. The party has to be willing to change regardless of timing because each time we get some kind of clout, leadership is quick to say that “Now is not the time for change.”

“No. Change now. More people like Alexandria Ocasio-Cortez are already beginning to get into public office, so it’s time to start building the next generation of leaders now, not later ‘when things are stable’.”

While some respondents raised important points and stuck to the issues, the discussion seemed always to revert back to Nancy Pelosi’s age.

This is not a zero sum game in which one cannot advance until another retires and fades away. This is the Machiavellian “divide and conquer” strategy, and it also smacks of ageism.

We can all win: those with experience and those who are coming into their own by keeping those with experience, talent, and commitment while delegating and mentoring the younger generation until it is their time to take over. We must not fall into the trap of placing people who still have a great deal to contribute onto a chunk of ice and float them out to sea with a loaf of bread and a final good buy.

While elders in most countries were once considered as wise and treasured members of their communities, in many contemporary societies, older people are often marginalized, stripped of their rights and responsibilities, their dignity, their voice, and the power over their lives.

First, the advent of the printing press was responsible for a major change in the status of elders. The culture, tradition, and history of a society or tribe now could be repeated innumerable times, in exact detail through books, and the status and power elders once had as the village historians was greatly reduced and, in many cases, eliminated.

The second major development in society that led to a shift in attitudes toward the elderly was the industrial revolution. The industrial revolution demanded great mobility in families—to go where the jobs were. In light of this new pressure to be mobile, the extended family structure (with grandparents in the household) was less adaptive. Older people were not as mobile as younger people.

I definitely understand the frustration over people trying to keep a tight hold onto power. We must be clear, though, about the institutional structure that replicates an inequitable imbalance of power for power’s sake between people, and a smooth transition of power for the proper functioning of an institution.

If, for example, the Democrats were to raise Alexandria Ocasio-Cortez to the speakership or even to the leadership of a House committee, that would be tantamount to presenting first-year students who were just admitted into college with doctorate degrees, without their ever attending classes or reading anything.

I admire and support Alexandria’s politics, but she has to gain the needed experience to navigate the political firestorm that is Washington, DC. This applies also to the other newer members of Congress.

And yes, I am also thinking of this personally. As a 71-year-old with a lifetime of experience as a social justice educator and community organizer, I still have a lot to give in the classroom and to the community.

If I were forced into pasture, I know I would die prematurely. And yes, this would be ageism.

In addition, if I had wanted to retire, with my current financial situation, that would be very difficult if not impossible.

We must work for a nation that guarantees a comfortable retirement for people who wish to retire. So many people remain at their jobs not because they love the work but because they can’t afford to leave.

If they were guaranteed a good retirement, the generational conflicts in the workplace would be eased significantly, as would the Machiavellian divide and conquer effect.

But now, if many seniors were left to retire on Social Security and savings, they would be forced to live in a third-rate senior community or nursing home.

Social Security barely covers many of our modest rents, utilities, and supplemental health care insurance. And we still must pay a significant amount each month for Medicare. Contrary to popular belief, Medicare costs the people who are covered. And we must pay taxes on our Social Security income.

This will take a basic restructuring of our economic system, but it is something we can all work for together. The current system has hurt and continues to hurt so many in our country.

We must no longer fight for crumbs from an ever-shrinking pie between the generations. We must, instead, join in unity and fight for a bigger and more equitable pie.

The Transgender Day of Remembrance is tomorrow. This is why.