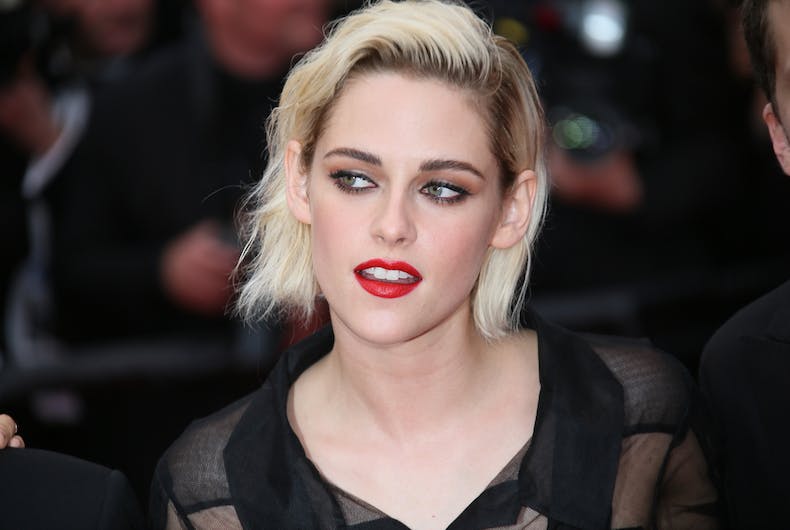 Kristen Stewart attends the 'Cafe Society' premiere and the Opening Night Gala during the 69th Cannes Film Festival at the Palais des Festivals on May 11, 2016 in Cannes, France.Photo: Shutterstock

Out actress Kristen Stewart is in talks to star in a Christmas-themed lesbian rom com called Happiest Season.

The movie will center around a young woman who plans to propose at her girlfriend’s family holiday party. Then she discovers that her girlfriend isn’t out to her parents.

Stewart came out as “so gay” last year in a Saturday Night Live opening monologue.

“The president is not a huge fan of me, which is so OK, because Donald, if you didn’t like me then, you’re really probably not going to like me now,” Stewart said at the time, “because I’m hosting ‘SNL’ and I’m like, so gay, dude.”

“I’ve really allowed myself to really freely and with no regard to the effect of others live my life,”  Stewart said in a later interview with the Associated Press. “There was just a time where I realized that the things you do and say when you have so many people looking at you, they do affect others. So I’m really proud of it.”

“But at the same time, I hate that it’s such a big deal. It’s a fact of life right now but it’s like, whatever. To me, it’s not personally that big of a deal but I know that it can be to others.”

She tried to keep lesbians off state property. She was just elected Senator.

He just wanted to relax, but his massage therapist sexually abused him instead