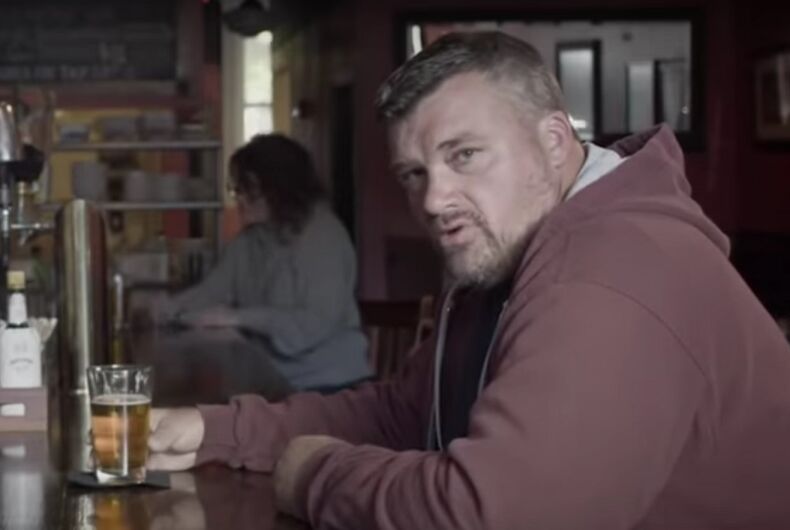 A "Masshole" explains why he supports transgender equality.Photo: Screenshot/YouTube

A “Masshole” explains why he’s voting yes on Question 3 in Massachusetts today.

A law that added gender identity to the state’s anti-discrimination laws was put on the ballot. Voting “Yes” on the referendum keeps the law on the books, making it the pro-transgender side.

A group called “Massholes Not Assholes” released an ad featuring a man with a thick Boston accent telling everything he does that annoys others.

“We bang U-ies wherever we want — no blinker. We cut you off on the Pike, and then we slow it right the fuck down. And the second that light turns green, I’m honking,” he says.

Related: A hate group used a store in an anti-LGBT ad. The store got them to stop.

But then he explains the difference between that and actually discriminating.

“You know, our forefathers originally granted us this right, to be loud, proud, occasionally obnoxious, and that freedom is so important to us. So, who are we to take away our neighbors’ liberties or revoke the law that protects their right to live a life free from discrimination? Or be biased against someone based on the gender they identify with? We’re Massholes, but we’re no assholes.”

The ad was created pro-bono by the agency MullenLowe working with “a group of trans-supportive citizens.”

The official Yes on 3 campaign, though, distanced themselves from it.

“While it’s intended to be a fun take on the ballot question, we recognize that this is a serious issue and the Yes on 3 campaign rejects name calling,” a spokesperson for the campaign said in a statement. “Our campaign is about dignity and respect for all people, including voters who are right now deciding how to vote on Question 3.”