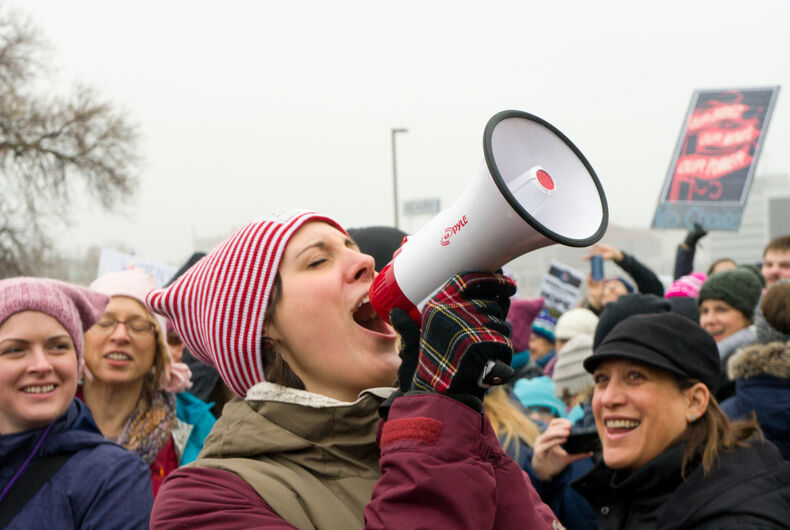 JANUARY 21, 2016: Unidentified particpants at the 2017 Women's March Minnesota. The Women's March represented the worldwide protest to protect women's rights and other causes.Photo: Shutterstock

The Women’s March was a key moment of 2017, as a diverse coalition of women and allies took to the street nationwide to draw attention to social issues in the wake of President Trump taking office. The march brought together five million people on all seven continents, and heralded a new era of political change.

Two years later, the Women’s March organization is facing it biggest challenge to date: amid charges of anti-Semitic and anti-LGBTQ bias, some of its leadership is pitted against each other.

The controversy largely started over two of the Women’s March leaders, Linda Sarsour and Tamika Mallory, and the latter’s association with Louis Farrakhan.

Sarsour, an American Muslim, has been critical about Israel’s treatment of Palestinians, even speaking out against Jewish progressives who remain in support of Israel.

Mallory, meanwhile, is a fan of Louis Farrakhan’s work within the black community, going so far as to pose in photos with the controversial civil rights leader.

In 2007, just months after the first successful march, Mallory shared a photo of her and Farrakhan on her Instagram feed, adding, “Thank God this man is still alive and doing well. He is definitely the GOAT” before wishing him a happy birthday.

Louis Farrakhan, the leader of the Nation of Islam, has been vocal against Israel over the years, with his rhetoric often delving into anti-Semitism, homophobia, and transphobia.

It is the connections between Farrakhan and the event that lies in the middle of the controversy, with the flames being fueled by the far right as a way to deflect from their own anti-Semitism and undermine the Women’s March.

Conservative columnist Bari Weiss, in an editorial in the New York Times in 2017, started this ball rolling by calling out march organizers over their association with Farrakhan, and other conservative new sources, particularly Breitbart, have sought to push this connection ever since.

The Women’s March itself put out a release last March to speak out against anti-Semitism, homophobia, transphobia, and other forms of bigotry as well as stating that, “Minister Farrakhan’s statements about Jewish, queer, and trans people are not aligned with the Women’s March Unity Principles.”

Likewise, Mallory spoke to NewsOne that same month, defending her attendance at the annual gathering of the Nation of Islam. She did not directly speak about Farrakhan, but did say that, “as historically oppressed people, Blacks, Jews, Muslims and all people must stand together to fight racism, anti-Semitism and Islamophobia.”

In the wake of the antisemitic killing at the Tree of Life Synagogue in October, however, calls against the Women’s March’s involvement with Farrakhan and claims of anti-Semitism have only grown.

Actress and activist Alyssa Milano — a long time supporter of the Women’s March — took to The Advocate to speak out, saying that she wasn’t planning to attend the 2019 March, and cited the Women’s March’s leaders lack of comment on Farrakhan or his anti-Semitism as the reason.

“Unfortunate that none of them have come forward against him at this point,” said Milano. “Or even given a really good reason why to support them.”

The controversy has only grown, with Teresa Shook, the woman who’s Facebook event posting is seen as the start of the Women’s March, took to the social media site to speak out against the organizations four leaders — Sarsour and Mallory, as well as Bob Bland and Carmen Perez — saying that the organizers have, “steered the Movement away from its true course” and calling on the quartet to step down.

“In opposition to our Unity Principles, they have allowed anti-Semitism, anti-LBGTQIA sentiment and hateful, racist rhetoric to become a part of the platform by their refusal to separate themselves from groups that espouse these racist, hateful beliefs,” said Shook.

Women’s March National Organizer Linda Sarsour penned a second statement on behalf of the organization, released on the 20th of November, saying that, “The Women’s March exists to fight bigotry and discrimination in all their forms – including homophobia and anti-Semitism – and to lift up the voices of women who are too often left out.”

“It’s become clear, amidst this media storm, that our values and our message have — too often — been lost,” Sarsour added. “That loss caused a lot of harm, and a lot pain. We should have been faster and clearer in helping people understand our values and our commitment to fighting anti-Semitism. We regret that.

Will this latest statement be enough to salvage the once-powerful event, or will it be dismissed? That remains to be seen. For now, the controversy isn’t going away so easily.

Thank God this man is still alive and doing well. He is definitely the GOAT. Happy Birthday @louisfarrakhan! 🖤✊🏾