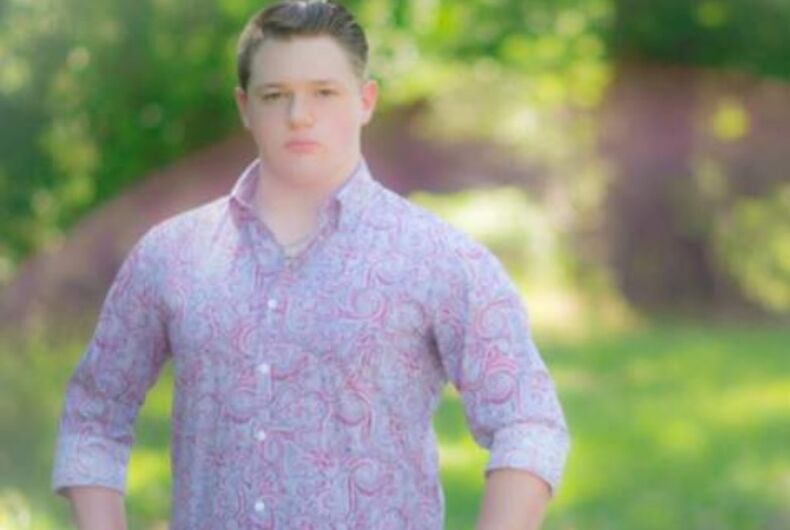 A gay man who was elected to a city council in eastern Texas was removed from office in a recall election that started when photos he sent on Grindr were made public.

In 2017, Cross Coburn, 19, ran in an uncontested race for city council in Groves, Texas, near the Louisiana border, the town he grew up in and where he faced relentless homophobic bullying in school.

But he wanted to give back, so he became a progressive city councilmember in a conservative town. The position is officially nonpartisan.

This past February, he was called into Mayor Brad Bailey’s office to discuss a “personal matter.”

Bailey had an envelope with naked pictures of Coburn and screenshots of a conversation he had with someone on Grindr. Any information that would have identified the other person had been edited out of the conversation.

On the first page, a note read, “Is this in any way proper behavior of a councilman to represent himself online or a ‘dating’ app? I felt the City Council should be made aware of the situation.”

Bailey said that he did not know who sent the envelope.

The mayor told him that if Coburn did not resign then he would contact the FBI or the Texas Rangers to start an investigation, although Coburn said he didn’t even know what would be investigated.

Several days later, he said he wouldn’t resign. His lawyer said that he had done nothing wrong.

That’s when the city manager contacted the city attorney about how to remove Coburn from office. The attorney emailed back that the only way to remove him was with a recall election.

So Bailey sent the images to local media outlets, including the local CBS affiliate and the local paper. They dutifully ran stories about the pictures.

Coburn apologized, but he later said he only did it because he got defensive.

“At this point I don’t know what I apologized for,” Coburn told the New York Times. “It was on a private dating app. I really don’t have anything to apologize for. But I was apologizing that it was brought up in the first place.”

On Facebook, the local debate about the images turned ugly. Coburn was called “a self-entitled little faggot prick” by people who wanted to remove him from office.

In August, Coburn received a “prayergram” in an envelope from the First Baptist Church, where Pastor Joe Worley vocally supported the recall campaign. A note read:

As a group of women that pray we have you on our hearts and minds. We are so concerned about our city and want it to be a place where all people can be happy. We know Jesus is the answer for our city and for you.

We are all mothers and grandmothers and we love to see young people follow Jesus.

A petition to recall him got over 900 signatures, and earlier this month 62% of Groves voted to remove him from office.

Coburn said that he doesn’t think he did anything wrong.

“I regret that it got out, but I will never regret being human. I do not believe that me having consensual conversations with another adult has any merit to how I can perform my duties.”

Coburn is challenging the election. At least two of the people whose signatures appear on the recall petition say that they did not sign it.

This GPS featuring drag queens may be fake, but you’ll want it now