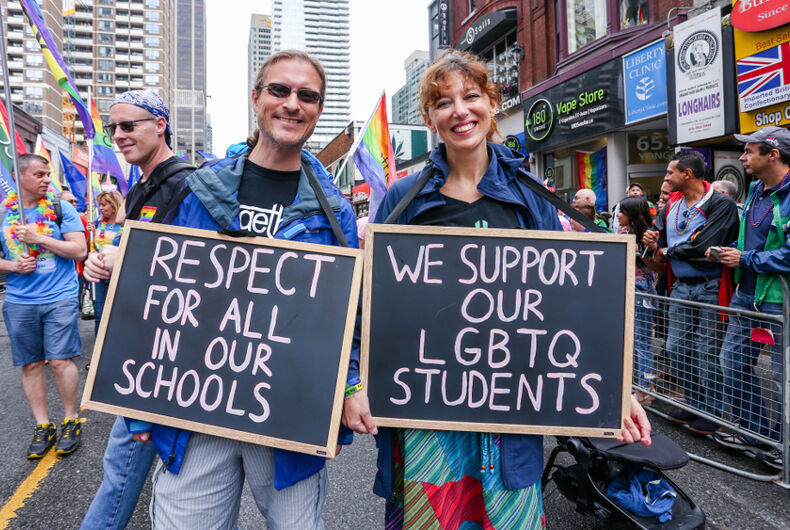 The Royal College of Paediatricians and Child Health (RCPCH) in the United Kingdom is calling for primary school students to gain an education into healthy relationships that is inclusive of LGBTQ people.

While they did stress that the materials should be “sensitive and age-appropriate,” they nevertheless made it clear that LGBTQ content is vital. Sex and relationship classes will become compulsory beginning in 2020.

In their draft guidance for the classes, created after a four-month consultation, the Department of Education stated, “Schools are free to determine how they address LGBT specific content, but the Department recommends that it is integral throughout the programmes of study.”

The RCPCH wants the government to go further.

“We have got a strong commitment against discrimination on LGBT and we need to commit to that,” said Dr. Max Davie, the college’s officer for health promotion, to the Telegraph.

The last few years have seen the debate over LGBTQ inclusion in school curriculum grow. In 2011, the California legislature passed the Fair, Accurate, Inclusive and Respectful (FAIR) Education Act which requires the state to include LGBTQ people in its social studies and history classes.

The California State Board of Education approved their education framework for the law in 2016, including stories about two-spirit shamans, a 19th century trans masculine person named Charlie Parkhurst, and even a discussion about the persecution of LGBTQ people during the Holocaust.

California is the only state to include LGBTQ topics in public schools. Many other states have so-called “no promo homo” laws expressly forbidding any discussion of LGBTQ issues.

A similar law, Section 28, had been on the books in the UK from 1988 to 2003. It prohibited the intentional promotion of homosexuality. But now, we may see the growth of positive LGBTQ-related content in UK schools.

The Royal College of Paediatrics and Child Health is the United Kingdom’s national group focused on children’s health. It was originally established in 1928 under its original name, the British Paediatric Association.

A debate over the draft guidelines will be held next June.