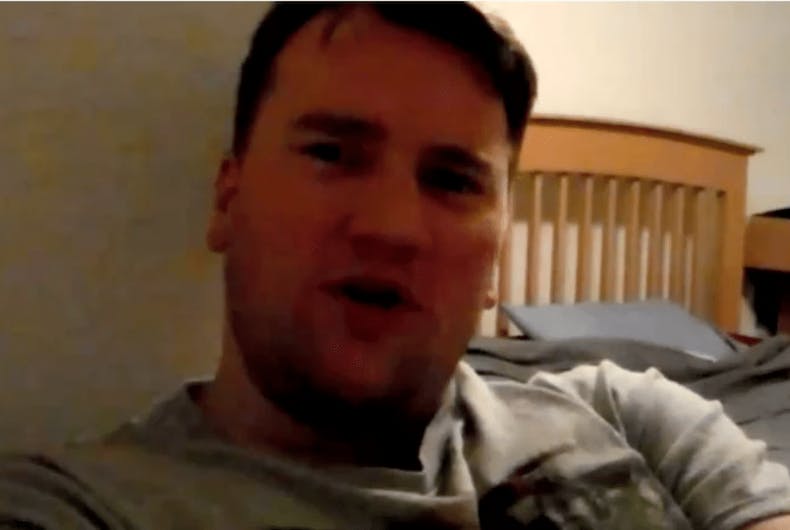 Scott Beierle, the deranged shooter who opened fire in a Florida yoga studio, killing two women and injuring five others, was a racist anti-gay Trump supporter who identified as an “incel.” Beierle was found dead at the scene of a self-inflicted gunshot.

“Incel” stands for “involuntary celibate.” The term originated in the darkest corners of the alt-right “manosphere.” The incel movement seems to consist almost exclusively of heterosexual men driven to rage by their inability to find women willing to date or have sex with them.

Beierle, a self-proclaimed misogynist, was a far-right extremist who ranted about women, immigrants, and black people on social media. He had previously been investigated for harassing women.

Related: Someone found a gay incel & he feels just as entitled as the straight ones

On YouTube he posted videos full of misogynistic slurs that complained about “the collective treachery” of the girls he went to highschool with. Beierle is 40-years-old.

“There are whores in — not only every city, not only every town, but every village,” he said, referring to women in interracial relationships according to Buzzfeed News. He said the women had betrayed “their blood.”

Beierle named Elliot Rodger, a self-described incel who killed six people and injured 14 in a shooting in a California mass shooting, in his videos. A man who drove a van into a crowd of people in Toronto also referenced Rodger by name.

“I’d like to send a message now to the adolescent males … that are in the position, the situation, the disposition of Elliot Rodger, of not getting any, no love, no nothing. This endless wasteland that breeds this longing and this frustration. That was me, certainly, as an adolescent,” Beierle said.

Beierle also wrote and recorded songs he uploaded online. Shortly before opening fire at the yoga studio, he uploaded a song called “Fuck ’Em All,” with the lyrics: “To hell with the boss that won’t get off my back / To hell with the girl I can’t get in the sack.”

Other ditties include “American Wigger,” “Who Let the Fags Out?,” “Bring Your Fatwa,” and “Locked in My Basement” – a disturbing tale of Beierle holding a woman prisoner in his basement and raping her.

Things were fine until he mentioned his boyfriend. Then the cab driver threw him out.