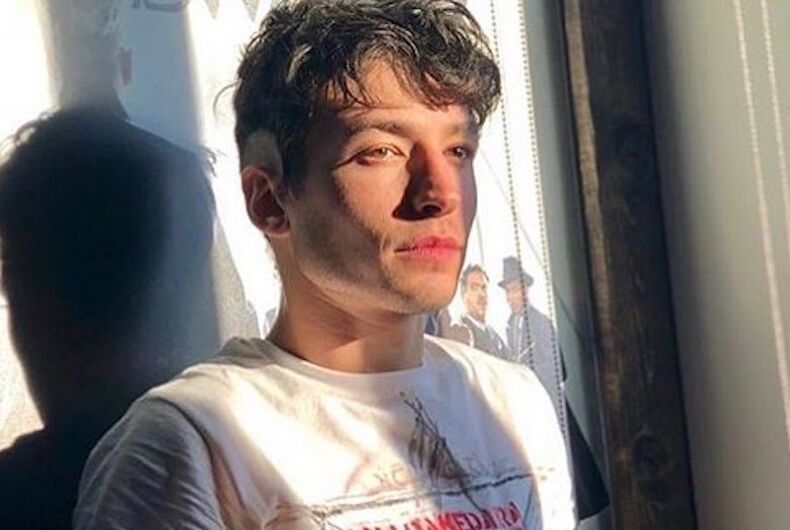 Out, non-binary actor Ezra Miller has emerged as a refreshingly candid queer celebrity, publicly dressing in sexy pink clothing, speaking about being sexual harassed, and sharing details of his polyamorous sex group.

Afropunk said that Miller co-wrote and co-directed a 2015 four-minute film entitled The Truth According To Darren Wilson. The film uses dramatic music and an emotional performance by actor Sean Rogers to recreate Wilson’s real-life testimony about the shooting.

Afropunk writes, “In this film they take the on story of the tragic, racist murder of Mike Brown from the perspective of the cop, Darren Wilson, who shot him, which creates a sympathy around him that fails to hold him accountable for his lethal action rooted in racism.”

They continue, “Can you suspend what you know about Ezra Miller’s participation in creating content that sympathizes with Darren Wilson or is this another example of white supremacy snatching another enjoyable thing from Black people?”

To decide for yourself, watch the short film below, and read our analysis below (which contains spoilers).

Yes, its first four minutes convey Wilson’s fear as he recounts his assessments before deciding to shoot. But in its final moment, someone knocks on his door, asking if he’s ready for his TV interview, revealing that his preceding testimony was in fact a rehearsal in front of a mirror before performing the same testimony on national TV.

As such, the film can be read one of two ways: Either it sympathizes with Wilson, showing a man so traumatized that he must rehearse his re-telling before sharing it with others, or it reviles him as a calculated liar, rehearsing his emotionally manipulative story to win over TV viewers to his version of the “truth.”

While it might’ve been more provocative to create a film from Brown’s point of view, no matter which way you view The Truth According To Darren Wilson, it depicts Wilson as calculating and casts serious doubt on his final claims that, “I help people. That’s my job… You can’t perform the duties of a police officer if you have racism in you…. I just wish everyone could be peaceful. That’s all you can do, is just wish for peace.”

Wilson’s murder of Brown and a U.S. Justice Department report on the city’s racially biased police practices made Ferguson a flashpoint for the burgeoning Black Lives Matter movement, a protest against police brutality and in favor of judicial system reforms.

But while Afropunk is savvy to un-earth this film, especially as former Attorney General Jeff Session’s final act in office was to undermine Obama-era reforms meant to reduce police abuses, the publication’s assessment of Miller’s film lacks nuance, oversimplifying a subtle but provocative take on this modern-day miscarriage of justice.

“In November 2014, a grand jury declined to indict Wilson for any crimes related to the shooting,” The Washington Post reports.