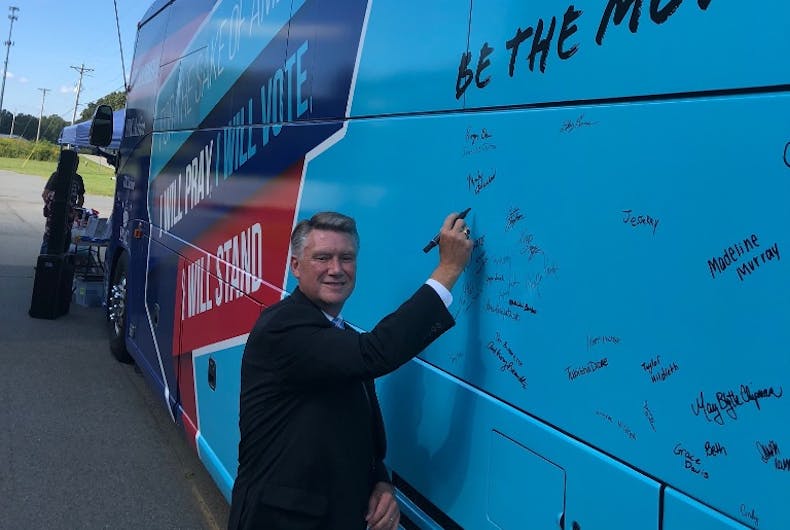 A lot of pixels have been spilled by political reporters speculating about the effect Brett Kavanaugh’s Supreme Court hearings have had on energizing conservative voters. It’s true that recent polling shows that Republicans are suddenly enthusiastic about the midterm elections, catching up with Democratic fervor.

But the rush to attribute GOP interest in the November election overlooks the formidable get-out-the-vote effort that the religious right has undertaken. If Republicans keep their losses to a minimum, or even manage some surprising gains, it will be due in large part to the mobilization of conservative white evangelicals.

The right’s effort to stir up voter interest has generally been overshadowed by mainstream coverage of Democratic efforts, including liberal-leaning religious groups. There are several bus tours promoting a blue wave, including Flip Congress and Vote Common Good, which are affiliated with progressive faith organizations.

While these tours make for good copy that is comforting to hopeful Democrats, the reality is that progressive faith groups represent relatively small numbers (and dwindling ones), especially when compared to conservative evangelicals.

By contrast, there’s the Values Bus, a tour with the multi-million dollar weight of Family Research Council Action, the political arm of the hate group Family Research Council. (Not that there’s much distinction between politics and faith between the two groups.) The bus tour is making 40 stops in battleground states, including Michigan, Tennessee and Wisconsin, all with the aim of revving up Christian voters.

Moreover, the bus tour is just a small part of a huge get-out-the-vote effort by the religious right. Faith and Freedom Coalition, which is headed by Ralph Reed, is spending $18 million to micro-target 125 million Christian conservatives in 19 states. (That’s nearly twice what the group spent in 2016.) The group has also joined forces with 30,000 churches to distribute voter guides tailored to the candidates running in each church’s area.

“We started around Labor Day and will run through Election Day,” Faith & Freedom Coalition Communications Director Lance Lemmonds told the Christian Post. “What that entails are volunteers going door to door. We have targeted voters based on their voting records and based on how we understand that they are pro-life.”

Joining in the turnout effort is Family Policy Alliance (FPA), an outfit formerly associated with Focus on the Family. FPA is spending about $3 million in its outreach efforts and has already been in touch with 850,000 voters in eight states.

It helps that Trump has been assiduously courting the religious right since Day One. For example, he appeared before the Faith and Freedom Coalition last year to pledge his support for the group’s agenda. In return, conservative evangelicals have taken to heart Trump’s argument that the midterms are a referendum on him.

“They will end everything immediately,” Trump warned.

Anyone who is skeptical about the electoral power of the religious right to turn out voters need only refer back to 2016, when Trump captured 81% of the evangelical vote. While demographics favor the Democrats, what matters most is who actually shows up at the polls on Election Day.

On that count, the religious right has an edge. Whether it’s enough of an edge to blunt Democratic enthusiasm remains to be seen, but don’t be surprised if it does.