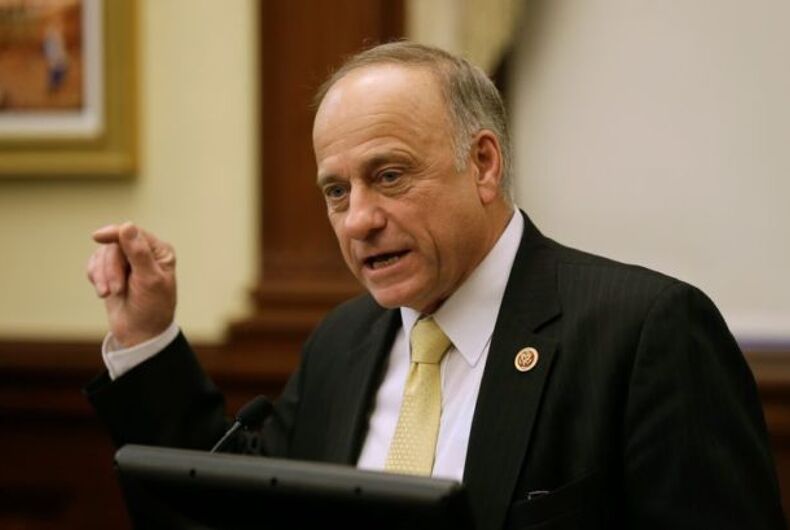 King told reporters, “If they were in America pushing the platform that they push, they would be Republicans.”

Representative Steve Stivers, chair of the National Republican Congressional Committee, finally condemned King’s blatant racism and xenophobia on Twitter, saying, “Congressman Steve King’s recent comments, actions, and retweets are completely inappropriate. We must stand up against white supremacy and hate in all forms, and I strongly condemn this behavior.”

As head of the NRCC, Stivers is responsible for getting as many Republicans elected as possible. For him to condemn a candidate – especially an incumbent one – is practically unthinkable.

Republicans and former corporate sponsors are finally distancing themselves from King because he is in a toss-up race with his Democratic challenger. Or maybe it’s because for the first time, King was completely truthful: European white supremacist Nazis would become Republicans if they could vote in the United States.

Recently, King supported the far-right candidate of Toronto mayor who once endorsed a book advocating for the “elimination” of Jewish people. In a March 2017 nationalist white supremacist rant, he supported far-right Dutch politician Geert Wilders by tweeting that civilizations cannot be restored with “someone else’s babies.”

King doubled down in a CNN interview by stating that he meant what he tweeted and criticized immigrants who “don’t assimilate into America.” Soon afterwards, former Imperial Wizard of the Ku Klux Klan, David Duke, retweeted King’s diatribe adding, “GOD BLESS STEVE KING!”

I found it extremely difficult and frightening to watch the Republican National Presidential Convention on its first night in 2016, since I had the definite impression that I was witnessing not simply a political gathering, but more distinctly, a neo-nationalist power rally with angry, primarily white and older party activists.

Before I could take pride in the accuracy of my own perceptions, Steve King piped in with a jaw-dropping quip by retorting, “This whole ‘white people’ business, though, does get a little tired, Charlie. I mean, I’d ask you to go back through history and figure out, where are these contributions that have been made by these other categories of people that you’re talking about? Where did any other sub-group of people contribute to civilization?”

King backtracked a bit and emphasized that in “Western civilization itself” and places where Christianity had a foothold was based on the contributions of primarily white people.

While one might automatically dismiss King as simply an extreme right wing crazy, the presidential standard bearer of his party, Donald Trump, has moved King’s rhetoric and policies to the center.

Throughout King’s infamous political career in the Iowa State Senate and U.S. House, he has consistently defended the authority of white Christian people.

He has targeted undocumented immigrants and rejected the notion that many are high-achieving students. King asserted that they should not receive a pathway to citizenship saying that for every valedictorian who is legalized, “there’s another 100 out there that weigh 130 pounds and they’ve got calves the size of cantaloupes because they’re hauling 75 pounds of marijuana across the desert.”

What seemed impossible, Trump actually moved to King’s right flank on issues of southern immigration, “The US has become a dumping ground for everyone else’s problems. [Mexico is] sending people that have lots of problems, and they are bringing those problems to us. They are bringing drugs, and bringing crime, and they’re rapists.”

Trump has subsequently placed the children of people attempting to gain refugee status into cages, he has ordered a massive buildup of our military to “guard” the southern border from what Trump terms “invaders” from Central America, and stated that he intends to try to eliminate the 14th Amendment’s guarantee of citizenship status to people born in the U.S..

King, in addition to Trump, was also a prominent and outspoken “birther.” In August 2012, he made the absurdist accusation during a tele-town hall meeting that though his staff had found Barack Obama’s birth announcement in two separate Hawaiian newspapers, “That doesn’t mean there aren’t some other explanations on how they might’ve announced that by telegram from Kenya.”

In addition, according to King while Obama was running for the presidential nomination in 2008, “When you think about the optics of a Barack Obama potentially getting elected President of the United States…[w]hat does it look like to the world of Islam?”

“I will tell you that, if he is elected president, then the radical Islamists, the al-Qaida, the radical Islamists and their supporters, will be dancing in the streets in greater numbers than they did on September 11 because they will declare victory in this War on Terror.”

Trump and King portray immigrants, migrants, and tourists as lower cultural and life forms, as invading hordes of barbarians at the gates who if allowed to enter this country will destroy the glorious civilization we have established among the lesser nations of the world.

The 2016 Republican Party Platform codified the language by defining the “other” as “illegal aliens,” as if they were dangerous and deadly non-human invaders from deep space.

“Multicultural” isn’t a sign of weakness; it’s a show of strength

Speaking to his supporters on August 21, 2012 at a town hall meeting, King conjured up a supposed deep and sinister plot to ensnare young and impressionable first-year college students into campus multicultural groups to turn them into victims. He said this will convince them to work toward the eventual overthrow of this country’s power structure.

King talked about preparing for a debate on the Iowa State University campus on the concept of multiculturalism. He checked out the university’s website.

“I typed in ‘multicultural,’” he stated, “and it came back to me at the time, 59 different multicultural groups listed to do, to operate on campus at Iowa State….And most of them were victims’ groups, victimology, people who feel sorry for themselves.”

He warned that these groups are “out there recruiting our young people to be part of the group who are feeling sorry for themselves. But just think of 59 card tables set up across the parking lot on the way to the dorm. And the first group says, ‘Well, you’re a victim that fits us. We want to help you. Why don’t you join us?’

“And then you’re brought into a group that has a grievance against society rather than understand there’s a tremendous blessing in this society.”

Though King attended Northwest Missouri State University, he never completed his degree. His political career began when he was elected to the Iowa Senate in 1996. While there, he was instrumental in passing the law mandating English as the “official” language of Iowa.

While in public office, he has consistently taken stands championed by the political right opposing affirmative action for women and minoritized people, marriage equality for same-sex couples, women’s reproductive freedoms, and gun control, among others.

Rather than resisting the concepts of multiculturalism and social justice and viewing these as challenges to our country’s very existence, we need to embrace our rich diversity.

Even then-Republican National Committee head, Reince Priebus, announced that the party must undertake better “outreach” to “minorities” in his “autopsy report” following the GOP’s failure to recapture the White House in 2012.

Today, the United States stands as one of the most culturally, ethnically, racially, linguistically, and religiously diverse country in the world. This diversity poses great challenges and great opportunities.

The way we meet these challenges will determine whether we remain on the abyss of our history or whether we can truly achieve our promise of becoming a shining beacon to the world.

Just in time for Halloween, here are the 10 gayest candies on Earth

These Republican candidates are so awful, their own families won’t vote for them