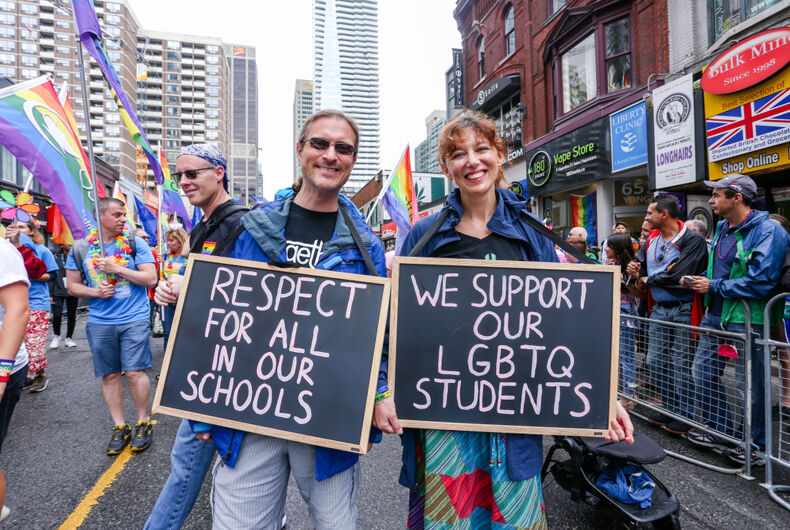 The Republican superintendent of Indiana’s schools has broken with conservative views, saying that schools that accept taxpayer money should accept LGBTQ people.

“When we still have schools that receive taxpayer dollars that can exclude students, that’s a problem,” said Indiana’s Superintendent of Public Instruction, Jennifer McCormick during a press conference.

In recent weeks, a Catholic school in Indianapolis put a counselor on paid leave after their same-sex marriage was uncovered. That school receives taxpayer money in the form of school vouchers.

Shelley Fitzgerald is a counselor at Roncalli High School. She was put on paid leave after the school discovered she was married to a woman. This is, apparently, in violation of her contract at the school, which requires that staff “convey the teachings” of the Catholic Church.

McCormick disagrees with the actions of the school.

“If our goal as a state is to develop a well-educated workforce and we want businesses to come here because we are inclusive and accepting, I think part of that goes to our actions,” said McCormick.

Others, like Bob Behning, a Republican member of the Indiana House of Representatives, disagree with McCormick. He frames this as an issue of “religious freedom” and empowering families.

“The taxpayer dollars go to parents not to schools,” said Behning to WXIN in Indianapolis. “So, it’s really parents making decisions and not the government handing money over to schools. I personally believe it’s probably more of an issue of religious freedom rather than an issue of discrimination.”