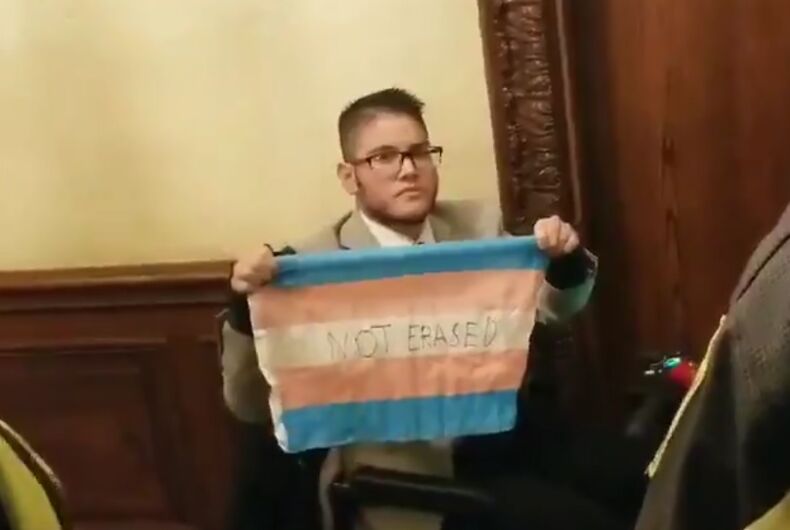 The protester, who used a wheelchair, was photographed outside of the speech.Photo: Screenshot/Twitter

A transgender activist interrupted a speech by Attorney General Jeff Sessions with a transgender flag and was removed by security.

Sessions was speaking at a Federalist Society event in Boston when he was interrupted three times.

A protester holding a transgender flag with “NOT ERASED” written on it was also removed from the event, probably a reference to the Department of Health and Human Services memo that outlined an interdepartmental plan to redefine “gender” and legally erase transgender identity.

Transgender individual in wheelchair ushered out of speech by @jeffsessions. "We will not be eased" were words directed at AG. @wgbhnews @NPRnewsdesk @pritheworld @TheTakeaway @maddow pic.twitter.com/2LzNq3ZjIg

Earlier, a man who said he was a member of the United Methodist church stood up, started reading a Bible verse about taking in strangers.

“Brother Jeff, as a fellow United Methodist I call upon you to repent, to care for those in need, to remember that when you do not care for others, you are wounding the body of Christ,” the man said.

Police removed him, and then another man stood up and identified himself as a Baptist pastor. He started to read a Bible passage and was also removed from the event.

Sessions said, “Thank you all for your comments.” He went on to say that it’s “not immoral, not indecent, and not unkind” to restrict immigration.

During his speech, Sessions attempted to spin the attack on a synagogue that left eleven dead this weekend as an attack on religion in general.