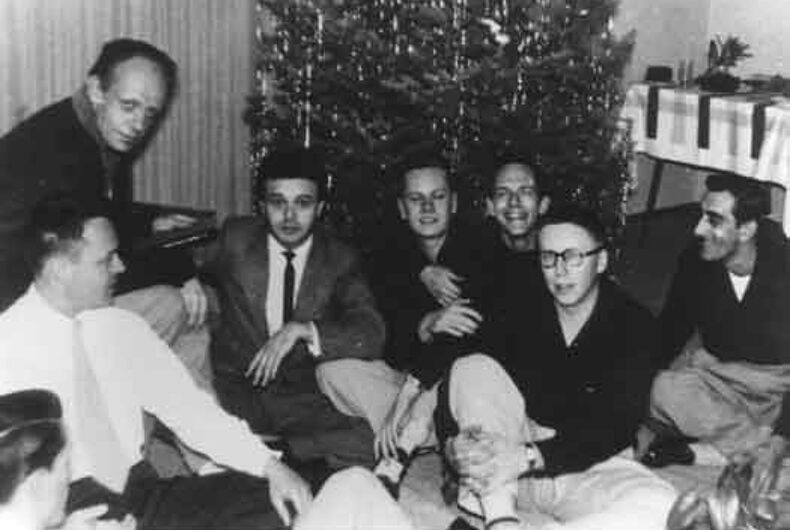 Harry Hay (upper left) with members of the Mattachine Society in 1951. Photo: Wikimed

Lost in the celebrations of this year’s Pride was the death of a historical crusader for LGBT rights. The passing of Dick Leitsch was a reminder of the role secret societies played in mid-20th century America.

Leitsch, who died June 22, led the New York chapter of the Mattachine Society. The West Coast based society ceased operations around 1973, but a memorial to Mattachine Society continues to this day in New York City. On Friday morning, Daniel answered the telephone at Julius NYC to confirm the once-a-month Mattachine party.

“They made a difference,” Daniel said. “They were extreme.” Daniel added it was “sad” that young people don’t know of this important period in queer rights.

The Mattachine Society was an early gay rights group that, in many ways, is shrouded in mystery. And for some, mainly younger LGBT people, it can feel like an entirely new subject in the queer history of America. But knowing the history of this group’s members is important because they were the beginning of LGBT advocacy and support in the U.S.

Founded in 1950 in Los Angeles, pre-Stonewall Riots, Mattachine grew from an underground social gathering into a public service agency, which is now celebrated through modern dance parties. Harry Hay, a man of many tastes and orientations, led the society at its inception.

And yet its mere mention still does not register with many in the LGBT community. The Mattachine Society existed during a time in America when it was not possible to be openly gay.

In the time before the Stonewall Riots of the late 1960s, many gay men and women were living double lives in opposite sex relationships. It took a radical fairy like Hay to establish the Mattachine Society as an important and viable networking group. Under Hay’s reign, the Mattachine Society’s existence was characterized as a masquerading society of fools.

“In those days the late Senator McCarthy was carrying on in Washington and seemed to be unable to differentiate between a homosexual and a communist and many reacted very strongly to this,” said Dick Leitsch, past president of the New York Mattachine Society in a 1969 radio interview with WNYC. Leitsch died of liver cancer at a Manhattan hospice. He was 83.

Mattachine Society members were groundbreaking activists. They were brave men willing to organize in secret knowing they could face disastrous outcomes if their sexuality was made known to the public. They were pioneers for a culture.

“Mattachines were court jesters of the 13th Century,” Leitsch told WNYC. “And they wore funny masks and they camped around a lot and acted silly but underneath the silliness they were speaking truth to the King and sometimes they were the only people in the Kingdom who could get away with it.”

Archival documents and notes of the group’s membership are still rather diﬃcult to obtain. Papers on the Mattachine Society can be found at the One Archives at the University of Southern California. The ONE archives — the largest repository of LGBT materials worldwide — have credible and extensive documentation of this once secret society.

Documents include notes from business and planning committee meetings. There is also a photograph from a holiday party showing Hay — one of the participants in Alfred C. Kinsey’s famous study of sexuality — and seven other men sitting around a decorated tree. Another file contains audio from a 1961 hearing on homosexual rights in Los Angeles.

Martin Meeker, 47, is the director at the Oral History Center at UC-Berkeley. He has researched Mattachine Society under the leadership of Hal Call and Don Lucas.

“Mattachine Society was run by people who recognized that the greatest problem faced by gay men and lesbians was their lack of access to information and their isolation from one another,” Meeker said. “Under the leadership of Hal Call and Don Lucas, the Mattachine Society sought to spread objective information about homosexuality and end the isolation of gay people across the country.”

Hay, an avowed Communist, led the Mattachine Society in 1952. Meeker’s evaluation is Call and Lucas were more eﬀective in leading Mattachine as they sought to inﬂuence opinions of experts through the publications and circulation of information.

“By 1954, Hal Call was allowing his name to be printed in the San Francisco Chronicle as the head of this homosexual organization,” Meeker said. “He was a publically out gay man, probably one of the ﬁrst in the country’s history.”

“To me, that is the definition of a radical act,” Meeker said.

As the Mattachine Society raised its proﬁle with magazine publications and social services assistance, the 1960s arrived with winds of change blowing. On the east coast, the Mattachine Society gained recognition with the 1966 “Sip-In” in which members challenged bars that refused service to gay people. The bars justified this practice as refusing to serve “disorderly” patrons.

At Julius New York, a Greenwich Village bar, the Mattachine Society currently has its own night on the third Thursday of each month. A person — who would only identify themselves as a “worker” — answered the telephone on a Tuesday afternoon last May.

“The Sip-In is celebrated as a big victory,” the man said. “It started the whole momentum of the gay community stepping up and fighting for rights.”

The Sip-In was a challenge to the State Liquor Authority’s discriminatory policy of revoking the licenses of bars that served gays and lesbians.

“At the time, being homosexual was, in itself, seen as disorderly,” Leitsch told the New York Times in April 2016. The Sip-In is widely regarded as a precursor to the Stonewall Riots. Leitsch frequented Julius New York up until his death this year.

Meeker’s work and papers on Mattachine focus on the 1950s when two men joined forces to wrestle control away from Hay and move Mattachine Society in a diﬀerent direction.

Meeker said Call and Lucas were “cold war liberals” and added some historians have mistaken the pair as “conservatives.”

“They were liberals like Arthur Schlesinger, Jr. who was an anti-communist cold war liberal,” Meeker said of the Pulitzer Prize winning JFK biographer.  “(Call and Lucas) were deﬁnitely liberal.”

The tension between Hay’s administration of Mattachine – what Meeker termed a “foundation” and Call and Lucas’ tenure is still reﬂected in today’s philosophies. Meeker said the most hate is often generated between radicals and liberals.

Back in New York, a more modern way of recognizing Mattachine is produced once a month at Julius, the city’s oldest gay bar and site of the famous Sip-In. Leitsch led the Sip-In protest on April 21, 1966, telling the bartender at Julius that they were homosexuals and wanted a drink.

There is a famous picture showing the bartender with his hand covering the glass as Leitsch places his order.

“That photograph was in the Village Voice and led to the end of that bar,” said acclaimed screenwriter and director John Cameron Mitchell. Cameron Mitchell spoke to the Mirror Magazine before Leitsch’s death. He called the Mattachine leader “an inspiration.” “We give him a big salute every me he comes in,” Cameron Mitchell said.

Julius’ rich history is rightfully acknowledged once a month when a night is set aside for the Mattachine. These parties are the brainchild of Cameron Mitchell and PJ DeBoy, collaborators on the 2006 feature ﬁlm Shortbus.

That show was Hedwig & The Angry Inch and Cameron Mitchell has played the title character. The Mattachine night at Julius’ has been described as trendy for the downtown city scene, Harder said. It has history too. Crafted out of a three-ﬂoor stucco building, Julius’ took its place on the National Register of Historic Places in 2016.

“It’s the only building in Manhattan I’ve seen stucco on,” Cameron Mitchell said. “It’s now a National Landmark building which is sad because the exterior is still ugly.”

Cameron Mitchell said today Julius’ is modeled after an old pub and it still serves burgers. It’s his neighborhood bar — “my living room,” he said. At one time, however, Julius’ was known as a place where young guys met older men.

“It was a hustler bar in the 80s and 90s,” said Cameron Mitchell. “And then those hustlers got as old as their customers.”

“Giuliani came in and in his view ‘cleaned these up,’” Cameron Mitchell said in a sarcastic tone. “When really he was just a bully and homophobe and he tried to shut down a bunch of dance parties…just because he’s like that.”

Still, Julius has endured. The oldest gay bar in New York City is the site of celebrations and parties. And thanks to pioneers like Dick Leitsch and the Mattachine Society, no one will be refused a drink based solely on their sexual desires.

Jake Lewis and David Altermatt contributed to this report. This article is published as part of the LGBT History Project.