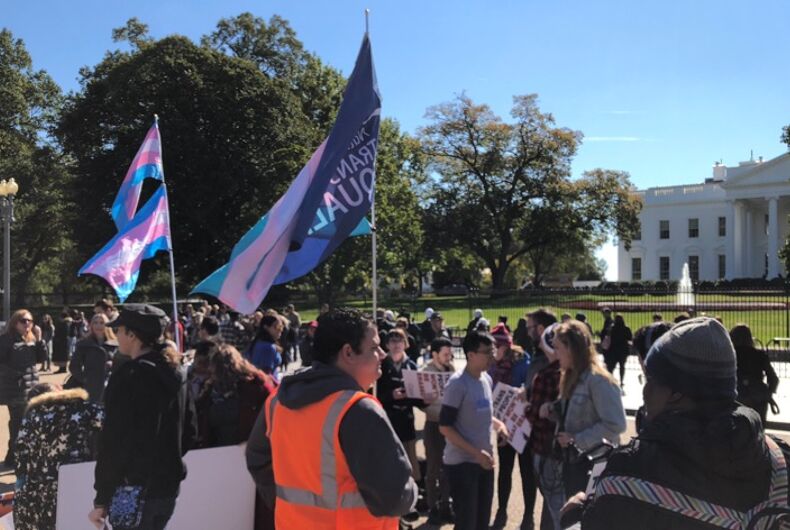 Activists protest outside the White House after news leaks that the administration is considering radically redefining the definition of "gender" to erase transgender people out of civil rights law.Photo: National Center for Transgender Equality/Twitter

A leaked Department of Health and Human Services memo that describes an effort to redefine sex in federal law as “a person’s status as male or female based on immutable biological traits identifiable by or before birth” spawned a protest in New York City last night and another at the White House this afternoon.

Sex would be defined by a person’s birth certificate, with any disputes settled with DNA testing. The purpose of the redefinition is to deny transgender people protection under federal civil rights law that prohibits discrimination on the basis of sex.

While activists took to the streets, celebrities took to social media to share in the outrage.

They can try all they want, but they cannot erase us.

Easily a couple hundred people here already for the #WeWontBeErased protest, waving #trans pride flags in opposition to the Trump administration’s proposal to define gender in strict terms, based on a person’s biology at birth. #DC pic.twitter.com/IjLdrZqOkY

Trump Administration Eyes Defining Transgender Out of Existence via @NYTimes
Fk These Ppl.Will MY SON Be Sent To INTERNMENT CAMP 2 Live with LATINO Children,& Be Kept In Cages in Places where🇺🇸Cant See Them.THIS IS”HIS CODE”4,..MAKE THEM DISAPPEAR #MBS https://t.co/UrXYSo5vK5

We must not give up the fight. But in the face of this affront on my existence and the existence of my community I choose love not fear. We exist and always have.

Example of the brutality of colonialism. This latest administration effort to legislate trans folks out of existence is yet another example of why the fight for gender equity must be intersectional and necessarily must include trans folks. Trans folks need everyone to stand with

us in this fight, to let our government know this is not who we are. We need the citizens of Massachusetts to #VoteYesOn3 Nov. 6 to send a strong message that you value the lives of your trans friends, family and neighbors. Trans people have been under attack by this

I can’t begin to express the rage I feel toward an administration that is trying to redefine me out of existence. Just another gift for his small minded base, terrified of the diversity that has always made America exceptional! #Vote https://t.co/OrAPEnaK9r

.@ACLU's Ian Thompson: "Each of these anti trans attacks has been met with appalling silence and indifference from Congress… It cannot and will not go unchallenged." #WontBeErased pic.twitter.com/yWgF0R3IRh

I woke to this. I'm honestly terrified. Basically TRUMP asked every gov agency define sex as only man or woman NOT Changable. only birth sex will be valid. disputes to be settled by genetic tests. He's already put people in charge who will approve this.https://t.co/pMDm3hzD1Z

I’m here. Overheard at the White House: “this is my therapy. Every time something bad happens, I hit the street…protesting and door knocking.” #WeWontBeErased #queerthevote pic.twitter.com/xJ2rZyIjpY

Posted by National Center for Transgender Equality on Monday, October 22, 2018