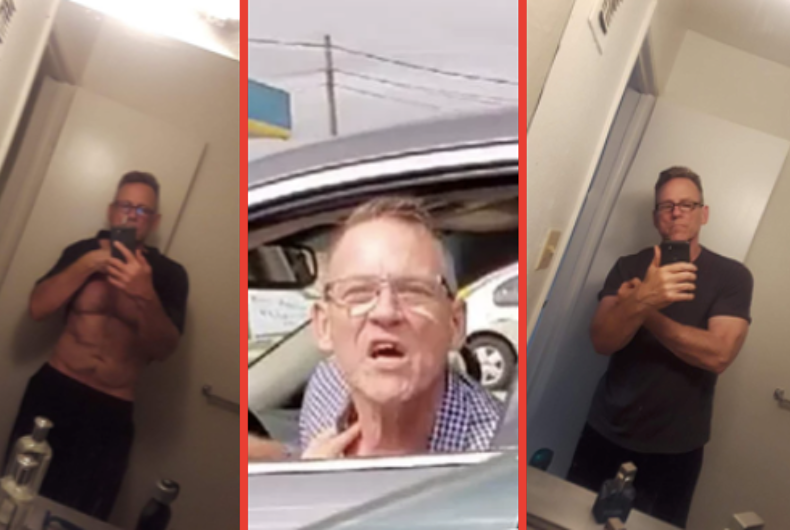 58-year-old Houston resident Charles Geier is apologizing after he was caught on video shouting racist and misogynistic slurs at a woman and her toddler-aged daughter. Geier is a gay Trump supporter.

Geier went into hiding after video of his hissy fit was uploaded to Twitter and he was promptly identified (along with his penchant for posting shirtless selfies on social media). Still, he gave an interview to the local ABC affiliate but insisted they refer to him as “Kevin.”

Janet Sadriu filmed Geier harassing her from his car at a stoplight. Sadriu was on her way to vote with her daughter in the backseat.

“You’re driving in two lanes, you stupid bitch. That’s not how you drive in America. Trump’s deporting your illegal cousins today,” he yelled out his window. “Learn English, bitch. It’s my country. Get out. Stop driving in two lanes anyway miss thing, okay?”

“Take all the pictures you like, bitch. You’re ugly. You need a gay friend to help you with makeup and clothes. Ugly bitch.”

Now Geier is singing a different tune. But his “apology” is more of an excuse than anything else.

“I reacted in a poor manner, I said things that were offensive that I shouldn’t have said, but what I want people to know is that I suffer from bipolar disorder,” he told KTRK. “It’s very real, it’s not a joke, it’s not an excuse.”

Bipolar disorder does not cause people who have it to be racist.

“All I want to say to her is ‘Miss, I’m so sorry, I hope you can understand more and I wish you nothing more than love and happiness for your family’,” he said.

Earlier this year, Roseanne Barr blamed sleeping pills for her racist rant on Twitter that resulted in the cancellation of her popular rebooted TV show. Sleeping pills don’t cause racism either.

Can we make this pleasure of a guy famous? Twitter is good at taking down racists. Took place in Houston. @MollyJongFast @krassenstein @EdKrassen @MattNegrin pic.twitter.com/Bbh5BpFfRP

Just in time for Halloween, here are the 10 gayest candies on Earth