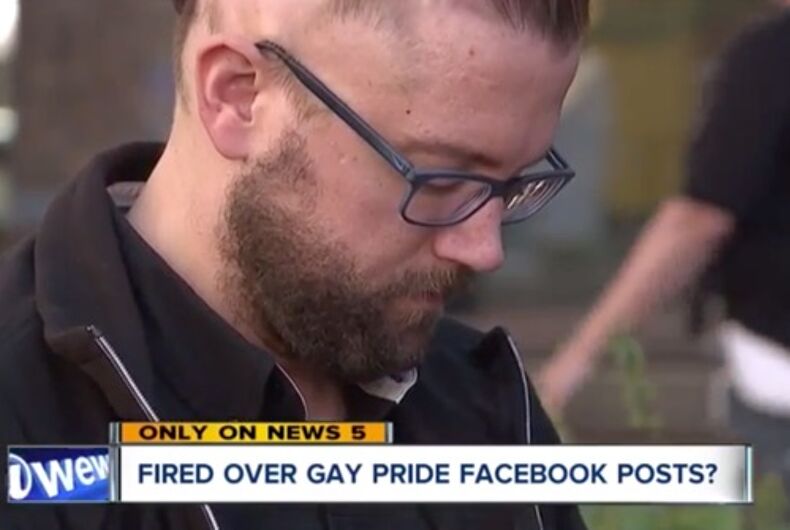 Gay minister Keith Kozak says he was fired for liking a photo of a same-sex wedding on FacebookPhoto: Screenshot

Keith Kozak thought he was asked to meet a human resources employee to accept a promotion. Instead, he says he was fired for liking a photo from a same-sex wedding on Facebook.

“When they called me in, I was thinking it had something to do with that,” Kozak said. “They sat me down and they said we had seen some things on Facebook and Twitter and that would like to talk to you about that.”

“It was a quick meeting. The very next day, I received a letter that said I was terminated.”

Kozak had “liked” a photo showing a same-sex wedding ceremony and posted other photos from a different wedding reception he had attended.

Kozak, the now-former outreach minister for the Catholic Diocese of Cleveland, told the local ABC affiliate that he didn’t come out to his employer. While he admits he kept his sexual orientation a secret from the church hierarchy, he also makes the ridiculous claim that he didn’t know the church was homophobic despite his need to stay closeted at work.

“I didn’t feel comfortable doing it, but I also thought it wasn’t important at the time,” said Kozak. “It’s a wake-up call for me, it’s a wake-up call that I didn’t really realize the Catholic Church would act like this.”

He also admits that he knew his posts on social media had to conform to church teachings, but didn’t feel like his posts did that for some reason.

The Catholic church is one of the most infamously homophobic religions. The church has come under fire recently for repeatedly firing teachers, church musicians, and social workers after either finding out they are gay or lesbian or have publicly supported LGBTQ rights.

A priest in Chicago recently burned a pride banner as part of an “exorcism.” The church has also started shutting down adoption agencies rather than serve gay or lesbian parents.

“The church in Cleveland has just been very discriminatory in my opinion,” said Kozak.

Do you know the history behind LGBT History Month?