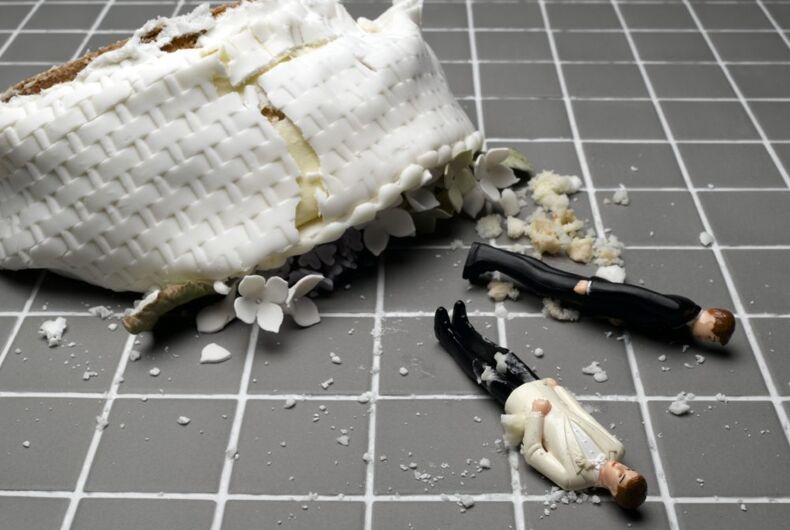 It was 2003, and the Obergefell v. Hodges decision that legalized same sex marriage was still more than a decade away, and Dean LeFleur’s boyfriend wanted a commitment ceremony.

LaFleur was unsure, having seen a lot of straight friends go through nasty divorces while he served in the military.

“I’m a former Navy fighter pilot, and while I was in the Navy, I saw buddies getting nasty divorces – having to leave their homes, and having to watch their wives stay in their homes and entertain other men while they were staying in a small apartment,” said LaFleur to Westworld. “And I said, ‘Man, I’m never going to wind up in that position. I’m never going to get married.’

He eventually relented: after all, same-sex marriage wasn’t allowed in Colorado, his home state.

Said LaFleur, “I thought, what could it hurt?”

Now LaFleur’s fears have been realized, as a Jefferson County court has found that that a commitment ceremony does constitute a legal marriage in Colorado, and LaFleur had to divorce his now ex-boyfriend before he could move forward with his life.

While their 2003 commitment had all the markings of a marriage, it wasn’t a legal marriage at the time.

“We called it a commitment ceremony, and the minister did, too,” said LaFleur. “The most it could be called was a mock wedding, because not only wasn’t gay marriage legal then, but we never dreamed it would be.”

“If I felt gay marriage was going to happen just around the corner, I would have been shyer to do it,” he added.

While the pairing did last until 2013, the relationship itself grew rocky over the next few years, with the pair living largely separate lives by 2013. LaFleur, however, found his former beau hard to get rid of.

“When I asked him to finally leave in December of 2017, he sued me,” said LaFleur.

Their shared living arrangements over the years did not lead to shared ownership of items like vehicles, nor other earmarks of a common-law marriage, like join tax returns — and the judge who oversaw this case, First District Judge Margie Enquist, agreed.

Like many divorces, this one proved ugly. LaFleur’s ex demanded 70% of his new worth. While he received less, he did manage to gain a substantial amount, including spousal support. LaFleur also incurred $30,000 in court fees, which may hamper his ability to appeal if he cannot find a lawyer willing to take his case for a reduced fee.

Said LaFleur, “I’m hoping someone reads this and says, ‘this is an interesting case. I’d like to have a piece of that.'”