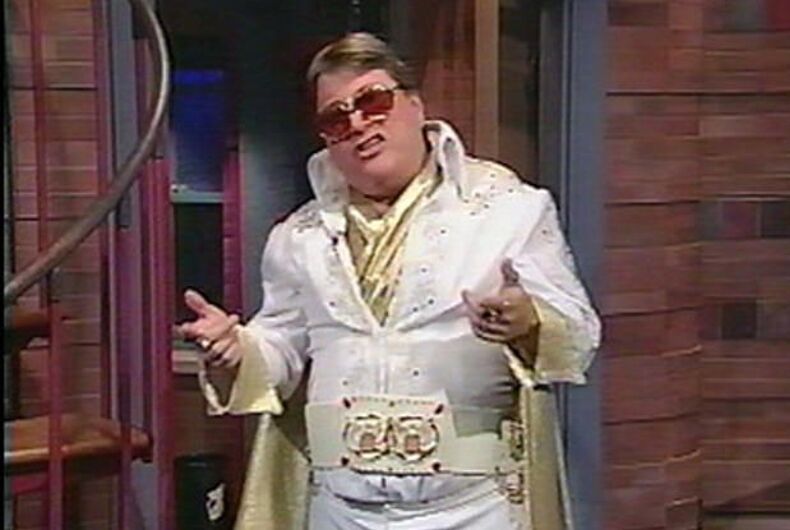 Vincent “Vinnie” Favale, the senior vice president of talent for CBS Televisions Studios, has been placed on leave following several incidents of sexual and homophobic language in the workplace.

According to CNN, one of Favale’s multiple sins included questioning Stephen Colbert’s orientation in front of employees.

“He would frequently call Stephen (Colbert) gay because of his seeming inability to interview women well,” a former CBS executive reported. “He would say this in rehearsals, the control room. Sometimes the CBS attorney would even be present, which to me is just shocking that nothing was done.”

Another CBS employee recalled Favale making similar statements about actor Hugh Jackman. While around 5-7 other CBS employees, they allege, Favale said that Jackman was “in the closet.” He also called Jackman’s 22-year marriage to Deborra-lee Furness a “fake.”

“It was so offensive. I really couldn’t believe it,” said the CBS employee. “I mean, this is an executive talking so openly like this… it’s mind blowing.”

Favale also attacked lesbians as mannish, with reports that, when talking about Rachel Maddow, the MSNBC anchor, he stated, “Who wants to see that ugly man on TV?” He reportedly made similar statements about another lesbian guest.

In addition to his sexism, Favale was also known for homophobic insults: a pair of people interviewed by CNN on the issue noted that Favale used “gay” and “homos” in a derogatory fashion, aimed at guests and co-workers.

Reports also state that, when booking women, Favale would prioritize appearance, saying that producers at Late Night should “book hotter” women — especially if the guest was appearing for political or social causes.

“When we wanted to book (Gloria),” said a CBS employee, “he said that instead we should find younger feminists who were hot.”

“There was a big drill, and we looked outside and went to the window. (Favale) compared the drill to ‘a big black dick’ as it was drilling into the ground,” a former CBS employee told CNN. “I couldn’t believe he said that.”

The employee in question was forced out of vital meetings after complaining, and eventually left the company voluntarily.

Favale responded to critics in a statement, saying that, “Allegations that I have ever retaliated against anyone in any fashion are 100% false.”

Related: Stephen Colbert’s Melania Trump impersonator will have you in stitches

He also excused his language, calling them “transgressive jokes.”

“I have spent my entire career working at comedy shows, where there has always been a wide latitude to make transgressive jokes while preparing the program. While we make a lot of jokes, these jokes attributed to me, whether said in rehearsals or production meetings, are being taken out of context and were not said in the way being presented here.”

CBS, likewise, issued a statement of their own.

“The comments reported in this story are offensive and not consistent with the standards we expect from our executives or the culture we want at CBS. The network investigated a complaint for inappropriate language that was received in January 2016, and corrective action was taken. However, since concerned voices are speaking up nearly three years later, additional review is warranted. Mr. Favale has been placed on leave while we look into this situation further,” said CBS.

The Late Show with Stephen Colbert did not issue a statement, but Colbert spoke out on his own show, downplaying Favale’s involvement with the late night program.

“An article came out on CNN today about an executive at CBS, who used to be the liaison to this show. And there’s only one show on the East Coast, and it was us,” said Colbert on his program this Wednesday.

“(Favale) basically came with the building when I got this show and used to be around here a lot,” added Colbert.

“About six months into the show some of our employees said they were uncomfortable with some things that he said, so we took their complaints to HR. They investigated twice, but I don’t really know what, if anything, happened. It seemed like someone was protecting this guy. I don’t know who it was. We eventually convinced the network to make a change.”