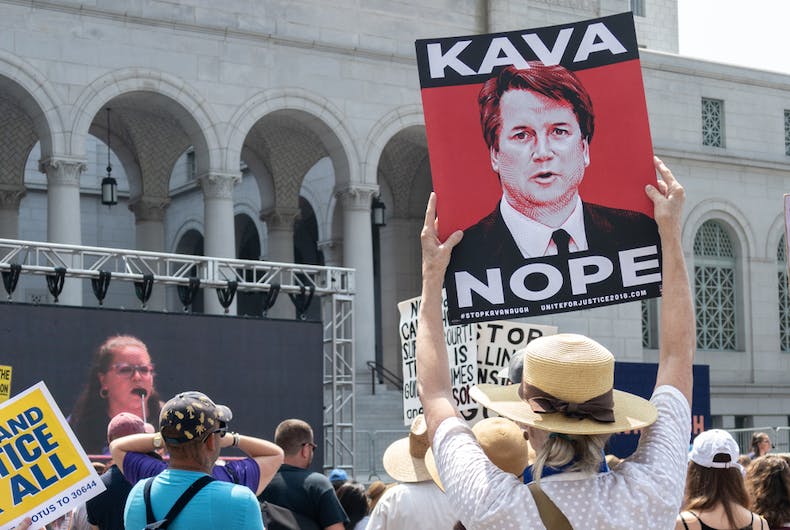 AUGUST 26, 2018: Protesters took to the streets to protest Donald Trump’s nomination of Brett Kavanaugh to the Supreme Court.Photo: Shutterstock

For months, Democrats have been counting down the weeks to Election Day, convinced that they are getting ready to ride a blue wave. Certainly, all the polling has pointed that way. Nate Silver’s FiveThirtyEight gives Democrats a 75 percent chance of winning the House. (The Senate odds are a lot lower: just two in nine.)

But Republicans have a secret weapon that is beginning to pay off: Brett Kavanaugh.

The prospect of getting Kavanaugh on the Supreme Court is the religious right’s payoff for their support of Republicans. But instead of being appalled by the accusations of sexual assault made by Christine Blasey Ford, Republican voters are instead buying into Kavanaugh’s defense that he’s the victim of a vast left-wing conspiracy.

Eighty percent of Republicans are now saying that the upcoming election is “important” or “very important,” an increase of ten percentage points since July. The gain essentially wipes out the advantage that Democrats had in voter enthusiasm. Democrats operatives are also reporting their own observations from their field show that races are beginning to tighten.

In fact, Republicans are now viewing the #MeToo movement as another example of political correctness run amok. A new poll found that a majority of Republicans would find multiple accusations of sexual harassment no bar to voting for a candidate that they otherwise agree with.

Amazingly, nearly half of Republican women would happily vote for serial harasser.

By revealing himself to be a partisan hack during last week’s hearing, Kavanaugh unleashed the enthusiasm of his supporters, who had been pretty meh about the upcoming election. Now the election has been shaped as a referendum on whether Democrats can ruin the reputation of a self-described altar boy.

Evidence to the contrary is simply rejected as fake news.

Driving a lot of Republican enthusiasm is the religious right. White evangelicals are now the only group that gives President Trump a favorable rating. Three-quarters of them think that he’s doing a fantastic job. No doubt, the selection of Kavanaugh played a lot into that belief.

Perhaps the enthusiasm will fade if Republicans unite behind Kavanaugh and send him to the Supreme Court. At that point, GOP voters may simply gloat about their victory and pay less attention to the election.

But if Republicans manage to staunch their losses at the ballot box, or if they even manage to hold onto their House majority, they’ll have Kavanaugh to thank for it.

Department of Ed will investigate trans student complaint after all. The kid is the target.