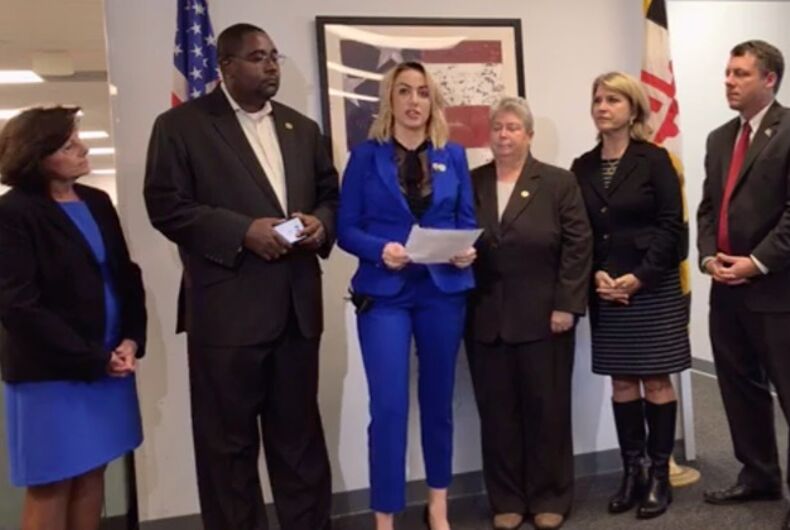 Out Maryland delegate Meagan Simonaire announces she will change her party affiliation to Democrat.Photo: Screenshot

Maryland House Delegate Meagan Simonaire is not your typical politician.

Not only did she come out as bisexual when the state was debating whether or not to outlaw the dangerous practice of “ex-gay” or conversion therapy, she did it when her own father – also a delegate – was one of the main proponents.

And she admitted that her own parents had tried to force her into conversion therapy when they found out. A Republican, Simonaire was not out until her emotional speech on the statehouse floor, taking even some of her colleagues in the party by surprise.

Now Simonaire is quitting the Republican party and switching her allegiance to the Democrats instead.

Related: A Republican dramatically came out to pass a conversion therapy ban in Maryland

“I am leaving the Republican Party today because it is important for me to stand with a party that is fighting for equality for all Americans. Minorities, the LGBTQ community, victims of gun violence, immigrants, women, Americans of all faiths, and communities being affected by climate change,” she said at a news conference announcing her switch in party affiliation.

“President Trump regularly attacks minorities, women and anyone who does not agree with him. I can no longer remain a part of a party that condones his rhetoric. It is reprehensible.”

Out Democratic legislator Bonnie Cullison welcomed Simonaire to the fold, saying her speech during the debate on conversion therapy was “one of the bravest moments I have ever witnessed in the legislature.”

Simonaire is not seeking re-election.

We are live at the Maryland State Board of Elections as Delegate Meagan Simonaire announces she will be joining the Democratic Party.

Dykes on Bikes: A moment on a motorcycle turned into a pride tradition

These amazing identical twins came out as trans & transitioned together