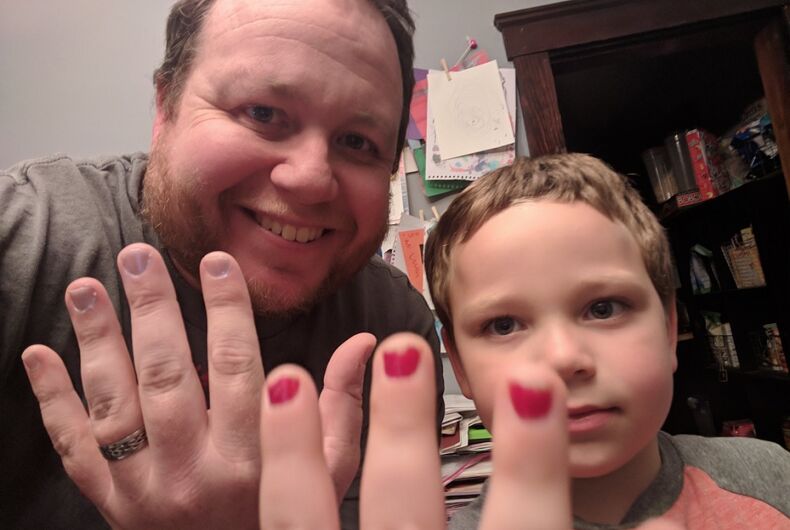 A Twitter thread from a dad who wore nail polish in solidarity with his 5-year-old son has gone viral.

@DaddyFiles wrote about how his son Sam likes both traditionally masculine and feminine things, and what that taught him about how gender roles are enforced.

Sam wore red nail polish to school, just because he likes it.

So he proudly wore his red nail polish to kindergarten this morning because Sam has absolutely no concept of nail polish only being for girls or reason to think anyone would possibly have a problem with beautiful nails. pic.twitter.com/WsHHupgw9H

But the other kids at school had a problem with it and made fun of him the entire day.

“Sam was ridiculed for being a boy with nail polish,” the dad wrote. “They called him names and told him to take it off. This lasted the entire day.”

When my wife picked him up from school he collapsed into her arms and cried uncontrollably. He was devastated at how other kids turned on him, even his friends. He asked them to stop but that just made it worse. Only 1 kid stood up for him.

“I know these kids are only in kindergarten but this toxic masculinity bullshit is LEARNED,” the dad wrote. “Learned most of the time from parents. So parents, I hope you’re proud. I hope this is what you wanted. I hope you’re satisfied.”

After a long talk about how Sam can wear nail polish if he wants to and how the kids at school probably don’t even know why they have a problem with it, Sam decided to keep it.

And his 10-year-old brother put some on in solidarity, which inspired Dad to do the same.

“That moved me to paint MY nails. Sam picked out this color called ‘Main Squeeze’ & I think it’s understated but lovely.”

That moved me to paint MY nails. Sam picked out this color called “Main Squeeze” & I think it’s understated but lovely. Sam is sticking with red because “it’s pretty and good luck for the @patriots.” #ItsOnlyWeirdIfItDoesntWork pic.twitter.com/KtuwldiEJw

This story just goes to show how early kids learn that they are supposed to police their peers’ gender expressions. It’s great that some parents are standing up for their kids instead of telling them to conform.