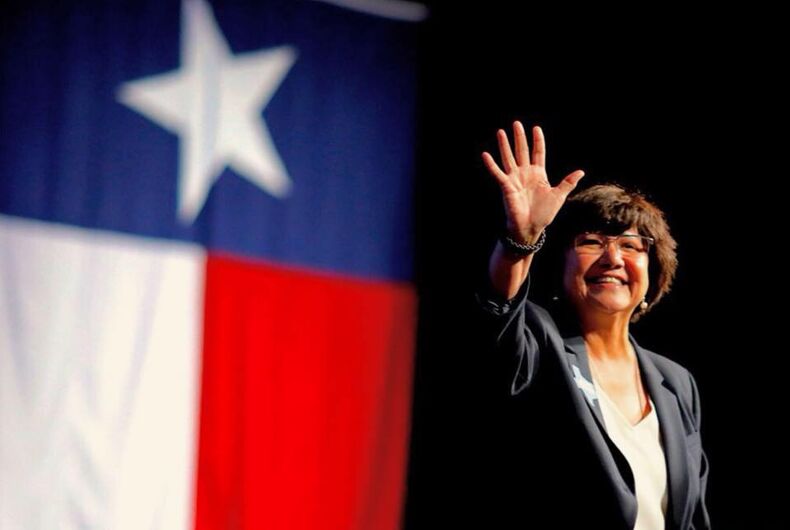 Democratic gubernatorial candidate Lupe Valdez is running to unseat Republican Gov. Greg Abbott in the midterms and, should she win, would be responsible for taking down the entire glass ceiling above her.

That’s because the pint-sized powerhouse would become the first openly LGBTQ Governor of Texas. That’s a far cry from the migrant farm working family she grew up in.

A former Dallas County Sheriff from 2005-2017, Valdez was the only Latina Sheriff in the U.S. when she took the post, and one of very few LGBTQ Americans serving in public office.

She later served her country as a captain in the U.S. Army and then as a federal agent, often undercover where she investigated fraud and abuse in the U.S. and money laundering from criminal organizations in South America.

Coming from a family of 10 children, Valdez doesn’t believe Texas is a red state. Quite the contrary; she believes constituents need to feel empowered to change their own backyard. And she’s speaking out.

“We’re a red state, because people don’t vote,” Valdez told NBC News. “The current administration will do all kinds of things to keep the Texas citizen from voting.”

To date, Valdez has been endorsed by 14 local organizations, including Planned Parenthood Texas Votes, Stonewall Democrats of Dallas (as well as the Houston, San Antonio, Denton County, and Austin chapters), Victory Fund, and Border Brotherhood of Texas.

Still, a recent blip on the radar has the potential to cause friction in Valdez’s aim to rule the world – or at least Texas.

A borrowed Beretta 9mm handgun went missing, but it eventually did show up – and it wasn’t even Valdez’s fault.

The missing gun was located in the property room and had been inaccurately checked back in.

“Sheriff Brown and the Sheriff’s Department offer their sincere apologies to former Sheriff Lupe Valdez for any distress and hardship that was created as a result of the Department’s mistake,” a statement read.

“I have been a responsible gun owner for over 40 years,” Valdez said in her own statement. “Throughout my law enforcement and military career I have always followed protocol when returning issued property.”

Valdez added, “My opponent considered this a slam dunk, thinking this would distract from his unwillingness to keep our communities safe from gun violence, but I will not be strong armed from keeping him accountable for his failures or be silenced on the need for gun reform.”

One thing is certain: you can count Valdez down, but she always gets back up. That, in itself, makes her a true contender in the 2018 midterms.