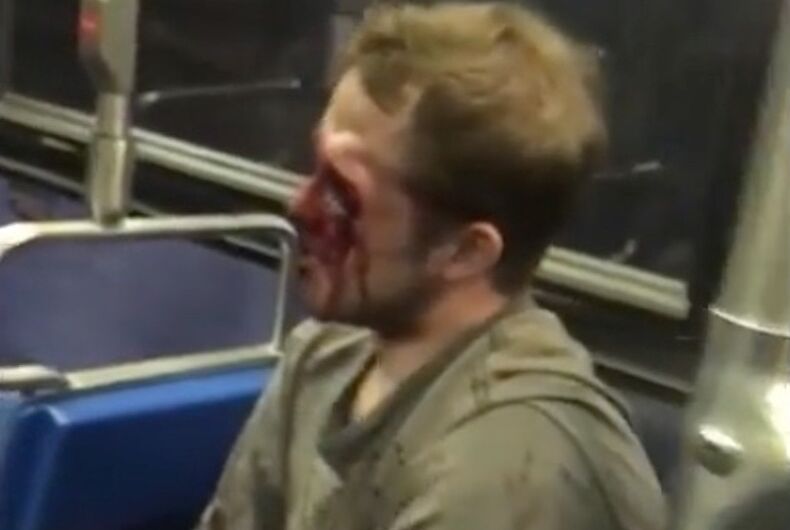 Sometimes gays bash back. One homophobe riding a bus in New York City found this out the hard way.

World Star Hip-Hop brings us video of the unnamed man harassing and launching an attack against another man. It’s not clear whether or not the victim is actually gay, but he doesn’t appear to deny the charge.

The video doesn’t capture what started the confrontation, but the assailant can be heard telling the victim, “You still suck dicks, though. I don’t give a shit. … I don’t fight with little faggot asses.”

The victim tells the aggressor he’s being recorded by other bus riders and starting a fight would get the man arrested. Instead, he invites the man to get off the bus if he wants to exchange blows.

“You look really dumb,” the victim says. “You’re trying to look for words and shit to say. You don’t know what the fuck to say. ‘Ahhh, ahhh, ahhh, all y’all are faggots and shit.’ Call people faggots outside. There’s no fuckin’ cameras outside. You wanna get a fuckin’ aggravated assault charge? C’mon.”

The victim turns to apologize to other bus riders for making a scene, but that’s when the homophobe launches his attack – and gets the snot knocked out of him.

When other riders separate the two, the bloodied would-be basher gets thrown off the bus and into the waiting arms of police officers.

Watch the video and try not to be overwhelmed with schadenfreude. If you’re on a mobile device and don’t see the video below, you can find it here.