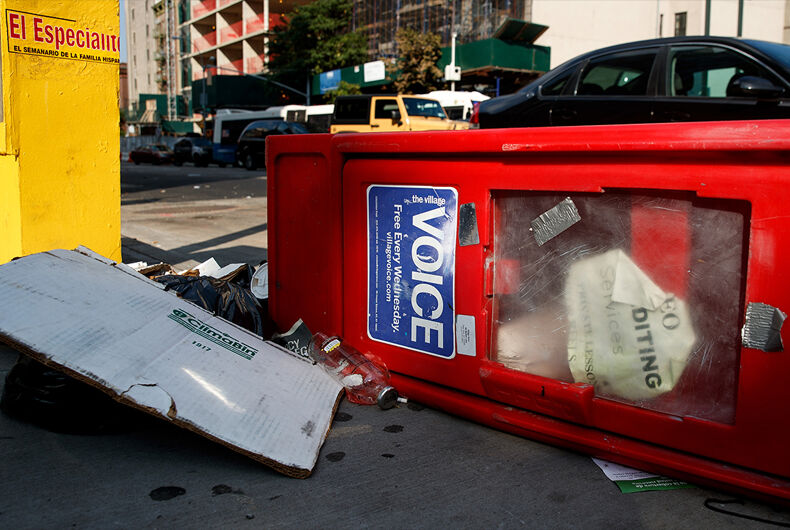 The Village Voice has closed its doors.Photo: Turner

After 63 years in the publishing industry, iconic New York newspaper The Village Voice has closed its doors for the last time.

The announcement came just one year after the Pulitzer Prize-winning alternative weekly mixed up its template by trading its print edition for exclusive online content.

Now, the company has laid off more than half of its staff and will no longer distribute any new content.

Evaporating revenue and a decreased interest in print media may be to blame for the newspaper’s demise, but it didn’t happen overnight.

The closure, on the other hand, feels like it did.

In an audio recording obtained by Gothamist, The Village Voice owner Peter Barbey is heard telling his staff, “Today is kind of a sucky day.”

The recording continues, “Due to, basically, business realities, we’re going to stop publishing Village Voice new material. I bought the Village Voice to save it. This isn’t exactly how I thought it was going to end up.”

Although, he did say he had considered selling to another entity instead of closing, but it didn’t pan out.

Barbey comes from a prosperous background. His family reportedly owns The Reading Eagle and shares in ownership of The North Face, Vans, Dickies, and Reef.

In 2015 he promised readers and employees that he would invest in the success and future of The Village Voice.

“I’m honored I had an the opportunity to purchase it and be part of its future,” he said at the time. “It’s one of the world’s great journalistic brands. It deserves to survive and prosper. It’s important to a lot of people. It needs to not be resource constrained. Kind of like anything organic, it just needs food and water.”

Former longtime investigative journalist at The Village Voice, Tom Robbins, told The Wall Street Journal of the closure, “It’s astonishing that this is happening in New York, the biggest media town in America.”

Staff said they felt something might be in the works after top shelf employees began leaving – and were not replaced.

“This is a sad day for The Village Voice and for millions of readers,” Barbey said. “The Voice has been a key element of New York City journalism and is read around the world. As the first modern alternative newspaper, it literally defined a new genre of publishing.”

The Village Voice launched in 1955. One of the founding members was Norman Mailer.

The groundbreaking publication was at the forefront of the HIV and AIDS early movement and has long been an advocate and outlet (literally) for the LGBTQ community.

You can read Barbey’s full statement below.

This is a sad day for The Village Voice and for millions of readers. The Voice has been a key element of New York City journalism and is read around the world. As the first modern alternative newspaper, it literally defined a new genre of publishing. As the Voice evolved over the years, its writers, editors, reporters, reviewers, contributors, photographers, artists and staff were united by the idea that the they spoke for and fought hard for those that believed in a better New York City and a better world. The Voice has connected multiple generations to local and national news, music, art, theater, film, politics and activism, and showed us that it’s idealism could be a way of life.

In recent years, the Voice has been subject to the increasingly harsh economic realities facing those creating journalism and written media. Like many others in publishing, we were continually optimistic that relief was around the next corner. Where stability for our business is, we do not know yet. The only thing that is clear now is that we have not reached that destination.

The Village Voice was created to give speed to a cultural and social revolution, and its legacy and the voices that created that legacy are still relevant today. Perhaps more than ever. Its archives are an indispensable chronicle of history and social progress. Although the Voice will not continue publishing, we are dedicated to ensuring that its legacy will endure to inspire more generations of readers and writers to give even more speed to those same goals.

We have begun working to ensure that the enormous print archive of The Village Voice is made digitally accessible. I began my involvement with the Voice intending to ensure its future. While this is not the outcome I’d hoped for and worked towards, a fully digitized Voice archive will offer coming generations a chance to experience for themselves what is clearly one of this city’s and this country’s social and cultural treasures.

From the bottom of my heart, I thank everyone who pulled together to attempt create a new future for The Village Voice. Their passion and perseverance have inspired me. I will always be humbled by the grit they’ve shown and the dedication they have displayed.

Brett Kavanaugh is even less popular than Roe v. Wade