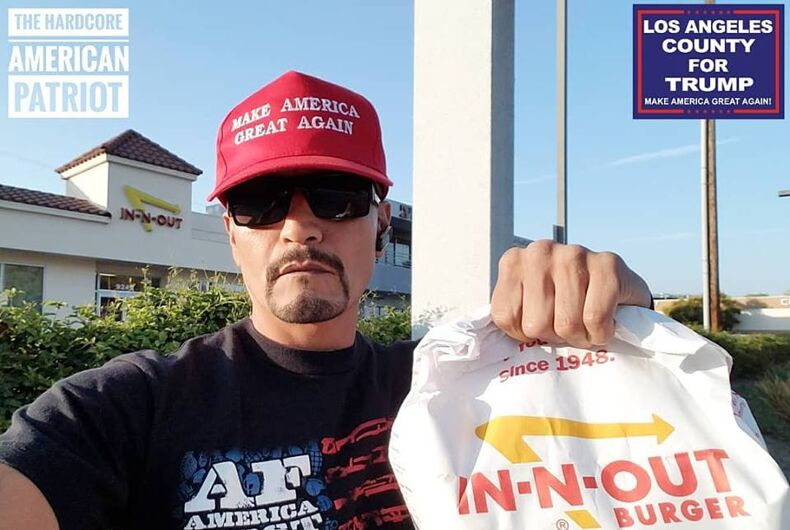 In the latest salvo in the fast-food wars, In-N-Out Burger has become the center of a fight between Trump supporters and opponents because of a donation the chain made to the California Republican party.

The controversy started when word that the California-based chain made a $25,000 donation to the state GOP. The move isn’t exactly popular in a state in which the Republican party runs third in party registration,trailing Democrats and independents.

The chain has found itself the target of a boycott among disaffected liberals, egged on by Democratic state party chairman Eric Bauman (who then backtracked). However, Trump fans have been quick to champion In-N-Out as the newest Chick-Fil-A, the chain that for years has attracted the ire of liberals for its CEO’s opposition to LGBTQ rights.

Indeed, Dan Bongino from the NRA made the comparison explicit on the gun lobby’s television program. Even InfoWars Alex Jones, still reeling from being banned from most social media, got into the act, saying that eating at In-N-Out “is like, super politically incorrect.”

In-N-Out has never taken the kind of high-profile political stand that Chick-Fil-A has. For three decades, the company has been including references to Bible verses on the inside rim of its drink cups. The references are so discreet that you have to look to find them. The Bible passsages were the idea of Richard Snyder, the son of the founders.

In the burger chain’s defense, it has noted that it contributes to both Democratic and Republican parties. Moreover, the contribution that sparked the controversy is modest at best.

By comparison, Amazon has spent more than $350,000 on Republican Congressional candidates this year and an equal amount on Democrats. Recipients include such anti-LGBTQ luminaries as Sen. Ted Cruz and Sen. Mike Lee.

But in today’s hyper-partisan environment, the battle lines are being drawn over everything. It’s just that in this case, they’re being drawn with ketchup.

LGBTQ people feel the pinch in their bottom lines