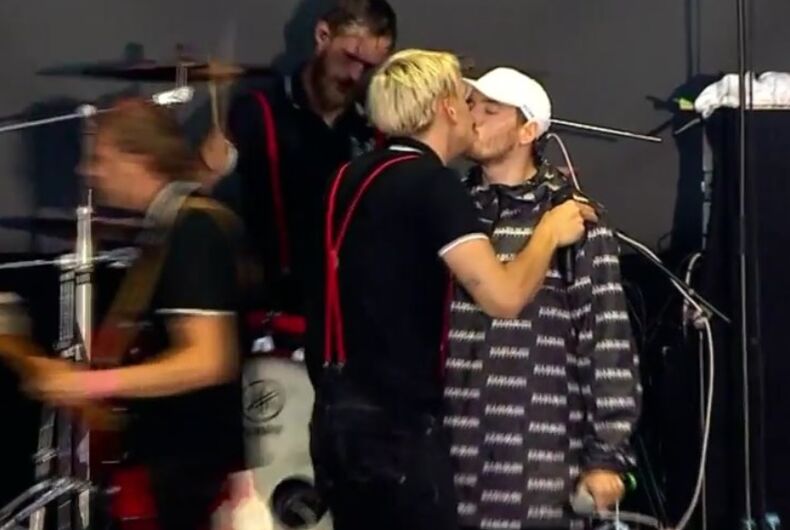 At a massive concert to protest neo-Nazis, two straight, male musicians kissed each other.

Performing in front of a banner that said said #WirSindMehr, or “We are more” – a reference to their message of how decent people outnumber Nazis in Germany – musicians performed at the concert in the city of Chemnitz for tens of thousands of people.

KraftKlub, a local band from Chemnitz, performed alongside nationally-known performers.

The band’s front man, Felix Brummer, kissed the rapper Casper on stage. The moment was caught on Twitter.

“And if you kiss me then the world is a little less shit!” Twitter user @huuajy wrote.

The concert was a response to a week of far-right protests in Germany, that started after a German-Cuban man, Daniel Hillig, was allegedly stabbed by two immigrants from Iraq and Syria.

The following rightwing protests in Chemnitz left at least six people injured in clashes with police. Nazi salutes and attacks on foreigners were reportedly part of the protests by “patriots from Chemnitz.”

A concert was organized in Chemnitz for earlier this week.

“This is not about the fight between right and left, it’s about basic decency,” said Campino of Die Toten Hosen, one of Germany’s most successful rock bands that headlined the event.

“We’re not naive,” Brummer, who kissed Casper on stage, told The Independent. “We’re not under the illusion that you hold a concert and then the world is saved. “But sometimes it’s important to show that you’re not alone.”

LGBTQ-friendly college list announced for 2018. Which states made the cut?