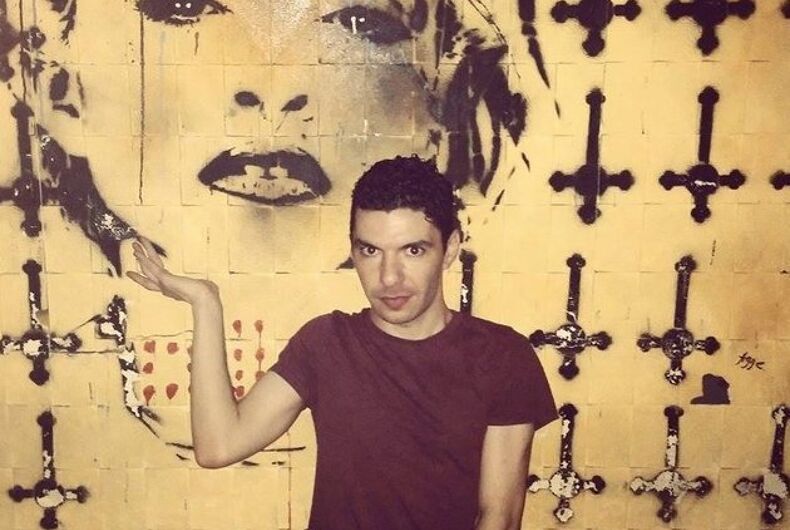 LGBTQ activist and drag queen Zak Kostopoulos was kicked to death by an Athens jewelry store owner in broad daylight and no one stepped in to help him. To add to the injustice, when police arrived they handcuffed and possibly abused the young man shortly before he died.

The shopkeep tried to claim Kostopoulos tried to rob the store and died after trying to escape through a broken window. Greek media swallowed the story – until video of the attack surfaced.

Instead, Kostopoulos was trying to escape a brawl in the street outside and was trapped in the store when the security locks automatically engaged behind him. The owner was outside the shop at the time.

The video shows a dazed Kostopoulos breaking the shop’s window with a fire extinguisher as he struggles to stand and escape. The store owner and another man start kicking him in the head as he exits and continue beating him as a crowd gathers to watch.

“His murder is all over the news presented as an accident: he died trying to escape through a shop window after attempting armed robbery,” an unnamed local activist told the UK outlet Freedom News. “The brutal, brutal video accompanying those articles shows a very different truth: a disoriented, unarmed Zak trying to escape and the shop owner with another man brutally kicking him to death.”

When a police officer arrives, they handcuffed Kostopoulos who was lying on the ground covered in blood. One Greek media outlet reports that bystanders and police also beat and kicked the man.

The owner wasn’t arrested until after the video surfaced. The other man involved has not been found.

The local coroner, however, says the reason why Kostopoulos died is “undetermined.”

“He had several wounds scattered in various parts of the body, small slashes that do not justify death, so we go further in laboratory testing,” the coroner said, Keep Talking Greece reports. “At this stage we can say after the microscopical examination during the autopsy, that there were no lethal injuries to justify the death.”

Over 400 people protested after news of the vicious attack spread. More protests are planned as activists call on police to do more to protect LGBTQ people from violence instead of assuming they’re the perpetrators.

While other outlets are claiming that Kostopoulos was “lynched by a mob,” the video clearly shows that did not happen.