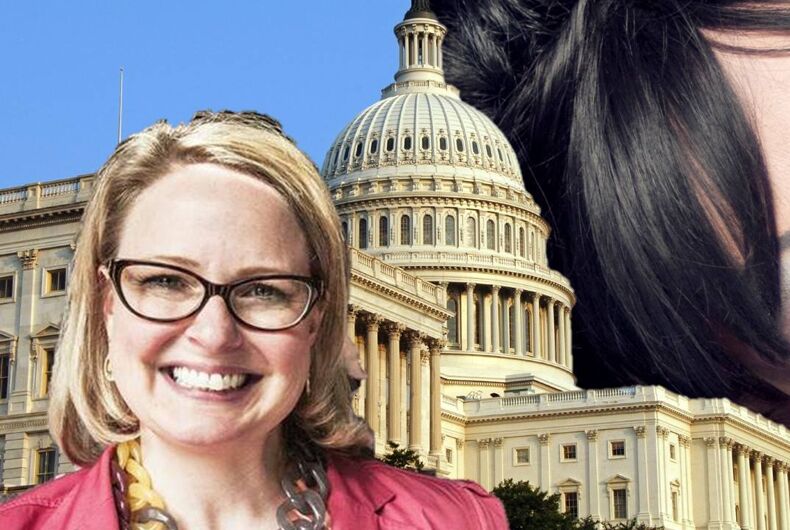 Indiana Republican congressman Jim Banks is flipping his wig over a drag fundraiser that supported his opponent’s campaign. He’s threatening to file an ethics complaint with the Federal Election Commission over the “deeply disturbing and offensive” event.

When Tritch finished speaking, video shows her dancing on stage with a drag queen and accepting paper money tips from attendees. Banks’ campaign claims that accepting the money, Tritch has violated campaign finance laws because she wouldn’t be able to report who gave the money.

“Not only is this video deeply disturbing and offensive but it clearly shows Democrat Courtney Tritch illegally accepting undocumented cash campaign donations while she dances on stage with a drag queen,” Steve Justus, Banks’ campaign manager told the Ft. Wayne Journal Gazette.

The paper does not report whether or not he was able to keep the sneer off his face when he said it.

Related: Watch this drag queen interrupt a wedding when the priest asks if anyone objects

Tritch’s campaign, however, quickly shot back with the best possible defense: the law. Accepting donations of less than $50 does not require campaign disclosure according to FEC regulations.

“We are exploring FEC violations and looking at filing a complaint. In the meantime, Ms. Tritch may want to consider apologizing for this charade to the northeastern Indiana families she’s campaigning to represent,” Justus said.

Since Banks has previously run for election, he presumably knows the ethics laws better than a first year political science student with the internet so he’s well aware the allegation is baloney. So what’s the real reason the campaign is making a stink out of this in a conservative area of a red state?

Oh, yeah. Homophobia and bigotry sells for Trump supporters. And Tritch’s campaign was quick to point that out.

“What is disturbing though is the clear homophobia demonstrated by Rep. Banks,” Tritch’s campaign manager, David Myles, said. “In asking for an apology to the families of the 3rd District, he is stating that the LGBTQ community is excluded from his idea of family.”

“If he would like to discuss his views on LGBTQ rights, as well as his positions on affordable health care, strong public schools, and high-wage jobs, he can agree to debate Courtney in person this fall, as we’ve requested multiple times.”

Good Lord! These priests were busted having sex in public

He sent pictures of corpses to people on Grindr. Now he’s charged with murder.