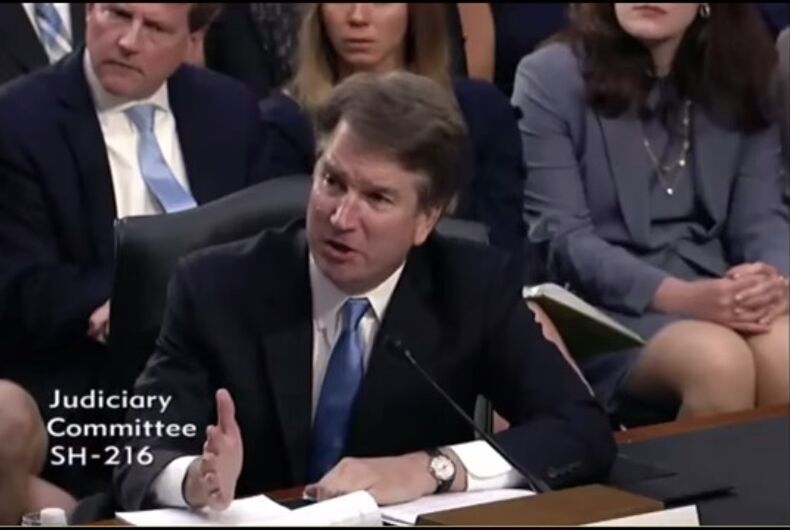 During his confirmation hearing, Supreme Court nominee Brett Kavanaugh would have you think that he’s just an empty vessel, with nary an opinion about anything whatsoever. But if you know a person by his friends, Kavanaugh is best buds with the religious right. A whole range of conservative Christian organizations have been pulling out all the stops to declare their love of Kavanaugh and push hard for his approval.

You can bet that these groups are so effusive in their support of Kavanaugh because they know that he will push their agenda, especially the anti-LGBTQ part, on the bench. Under questioning from Sen. Kamala Harris, Kavanaugh expressed no opinion about the Obergefell ruling that made marriage equality a right.

Kavanaugh’s religious right supporters don’t share the nominee’s shyness about their views. Their statements following the hearings make it clear that they consider Kavanaugh to be in their pocket.

Just start with Brian Brown, head of the National Organization for Marriage, which has been battling marriage equality for more than a decade.. “There is nothing more important to the cause of marriage, life and religious liberty than to have a pro-family majority on the US Supreme Court.,” Brown said. “When Judge Kavanaugh is confirmed, we will have that majority.”

Or consider Tony Perkins of the Family Research Council, which has been designated a hate group by the Southern Poverty Law Center.  Perkins blasted the Democrats’ line of questioning, which elicited no answers from Kavanaugh. “2020 hopefuls like Senator Kamala Harris (D-Calif.) were demanding that Kavanaugh answer questions they’d never dream of asking a liberal president’s nominees,” Perkins complained, citing Harris’s Obergefell questions.

And then there’s My Faith Votes, a group aimed at turning out evangelical voters and chaired by Mike Huckabee. Its CEO, Jason Yates, explicitly tied Kavanaugh to the Masterpiece Cake decision and the baker at the center of it who refused to make a wedding cake for a gay couple.

“The whole nation has watched as local and state governments have actively tried to force people of faith to keep their beliefs under a bushel, such as with the baker Jack Phillips in Colorado,” Yates said. “These points alone should make all Christians pay attention to and support Kavanaugh’s confirmation.”

The religious right wasn’t always so smitten with Kavanaugh. They were tangibly disappointed that Trump didn’t pick Amy Coney Barrett, who is a lot less shy about sharing how her religious views shape her legal philosophy.

But Kavanaugh is such a product of the right-wing legal machine that the religious right has come to realize that he will deliver for them. Indeed, Kavanaugh has been described as having been “raised in a test tube” by the right for a position on the Supreme Court.

His credentials rely upon–and were shaped by–the conservative legal community, led by the Federalist Society. That influential right-wing group actually ran the process of selecting the nominee, since President Trump couldn’t be bothered doing it himself.

So there’s good reason why the religious right can’t wait to get Kavanaugh on the Court. He may not be an evangelical (he’s a practicing Catholic), but when it comes to legal matters, he’s one of their own.