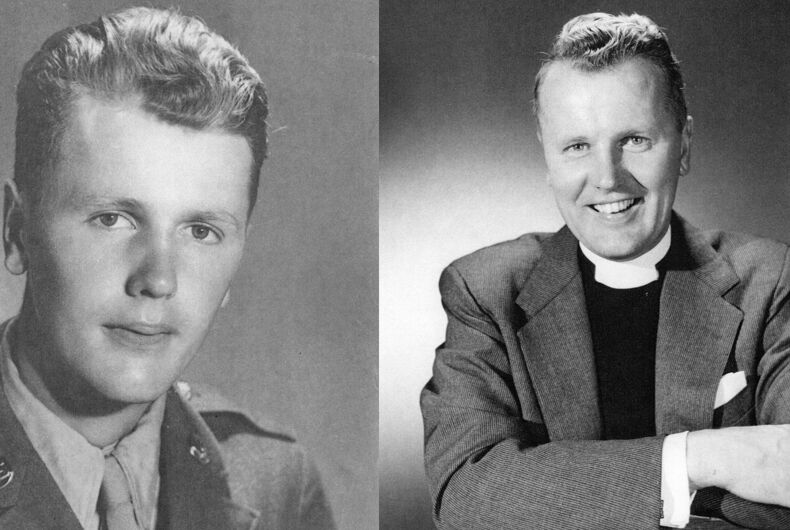 Reverend Robert Wood as a young soldier and a minister.Photo: Provided

My name is Robert J. Paradis. I would like to honor my friend, Reverend Robert W. Wood. Some of you will know him, most may not; but he was one of the early gay pioneers of the 50’s and 60’s. I would like to tell you about him and his involvement in gay issues throughout his life.

He was born in 1923 in Youngstown, Ohio. His father was an electrical engineer. Bob used to brag a little about having the latest gadgets in the house while he was growing up. His parents did not smoke or drink and neither did Bob for his whole life. He also lived in Akron and Lorain where he was active in the Congregational Church’s youth activities and the Boy Scouts.

Bob’s father and his brother Harold were both military men. Because Bob’s dad had been in the Army, he enlisted and began basic infantry training in January 1943 at Camp Walters, TX. Even after realizing that he was different, he served his country at a time of war, as many others like himself had.

He knew out of observation and from remarks made by fellow servicemen that he had to suppress his true self. He was proud but disillusioned by the treatment of the fellow soldiers and citizens that shared his secret when he came home from the war after being wounded in combat.

In We Went to War by Meg Heckman and Mike Pride, a chapter is dedicated to Bob. His chapter is titled ‘This One’s Alive’.

He’s quoted saying, : “… I passed the stockade.  There was a fenced-in place where they could be outside and shoot some baskets.  As I walked by, I saw two fellows about my age with a great big capital Q on the backs of their prison jackets.  That enraged and frightened me. I thought immediately of Nathaniel Hawthorne’s Scarlet Letter.”

He later described the attack by the Germans on December 14, 1943, on Mount Maggiore in Italy. He was on guard duty and after giving the first part of the passcode “Angus”, an enemy bullet hit him directly above his dog tag chain and went clear through his body. Then a bayonet thrust deflated his right lung.

“An aid man patched me up.  The next day, the fighting was over, and four fellows had to carry me down the mountain,” he said.

Bob ended up at a frontline MASH unit where it was determined that he should be placed in the reject pile among those who were expected to die.

The next morning when the groans and moans of the dying soldiers had stopped he “could see daylight coming in under the flaps of the tent.” He smelled bacon and coffee. He had not eaten in over twelve hours.

“I said what I think are the six most important words I ever said: When do I get some breakfast?” he said.

He then heard a woman scream, “This one’s alive.”

He returned to the United States as a litter patient on a hospital ship. After 22 months in military hospitals and rehab, he received an honorable discharge, a Combat Infantry Badge, a Purple Heart, two battle stars, and a Bronze Star for “heroic achievement in combat”. At a rehab station, Bob had his first sexual encounter with another wounded soldier.

“Both of us were virgins, and neither of us knew what to do,” he chuckled. “He suggested we show each other our battle scars, which was an innocent enough thing, but that meant we had to take off our clothes, and by then we were figuring out what to do.”

Becoming A Fighter For Gay Rights

After the war, he completed his bachelor’s degree at the University of Pennsylvania and later graduated from the Oberlin School of Theology in Ohio. He felt a strong sense of purpose to his faith. While in the seminary he was concerned for himself and other gay men.

He was ordained in 1951. He joined the staff of the Broadway Tabernacle in Manhattan where he blessed same-sex unions. While there, he wrote for gay physique magazines starting in 1956. He called these articles “Spiritual Exercises” in his first attempts to minister to gay men.

It was during this time he sought out people and became pro-active in sharing with them ideas about what could be done to educate those who were prejudiced against gay men and woman. The very faith he professed did not support or offer hope for the salvation of the practicing homosexual.

Bob took this struggle as a calling to help his church and institutions by trying to instigate a dialog of education, understanding, love and tolerance. He wanted to minister that the Christ he loved and worshiped, loved all people no matter who they were. The church, not Jesus, was the one condemning gays.

Bob’s book Christ and the Homosexual was published under his own name in 1960. The book was written to educate homosexuals and heterosexuals alike. He tried to teach ways the church, government, society, families and friends were failing and creating physical as well as mental harm to fellow human beings.

It sold 3,000 copies and received two awards. His book was self-published and funded from a loan on his life insurance policy. It was the first book to call for recognition of same sex marriage.

In the preface to his book, Bob stated that he was not a theology specialist or an expert in psychology, but a concerned member of the clergy. He wanted people to know that homosexuality was more than just two people having sex. He wanted to stimulate Americans to appreciate that the homosexual can be considered moral.

The Cowboy Rides To The Rescue

Reverend Wood met Hugh M. Coulter, an artist and a cowboy, in a gay leather bar in Manhattan in May 1962. They had 27 years together and wore matching gold wedding rings.  Hugh served with the United States Air Force in the Pacific. He attended the Southern Methodist School of Art in Dallas, Texas on the GI Bill and while there became a rodeo cowboy. Later he studied at the Brooklyn Museum of Art and later the Museum of Modern Art in New York City.

The night they met Bob was dressed in leather and Hugh was in his cowboy attire. Hugh introduced himself and Bob said “You are my fantasy.” Hugh replied “I’m no fantasy.” It was love at first sight.

Though they had been exploratory before they met, they were monogamous from that first encounter to the end. Reverend Wood had feared he would not find someone who would understand and support his devotion to Christianity. Hugh was supportive of Bob as he was of Hugh’s art. They lived together in three parishes.

Bob said in an interview in 2007 for a 50th anniversary book published by the United Church, “We chose not to ‘out’ ourselves but to live our lives as a caring, loving couple and let parishioners and everyone else accept us as they found us.”

Hugh accompanied Bob and church members on trips to the Middle East. Hugh gave Reverend Wood an abstract painting that resembled a stain glass window with the outline of a cowboy on their first Christmas together.

In June 1965, Bob and Hugh marched in the nation’s first gay picket line in Washington, D.C. From 1965 to 1969, Bob participated in annual reminders which was a protest of the unfair hiring practices of gays.

He also marched and worked with African-Americans for their civil rights. When Bob asked for some of the leaders to join in the protests for gay rights, he was told that gays could hide but that blacks could not. Bob replied “We don’t want to hide.”

In 1969, in an interview recorded before Stonewall and aired after the event, Reverend Wood spoke live on the radio about gay marriage and how the church could support homosexuals.

When Reverend Wood retired in 1986, he and Hugh were living in Pepperell, MA. He arranged for his mother to go live at Havenwood Retirement Community, a UCC affiliated facility in Concord, NH. He commuted between Pepperell and a cottage his mother had lived in in Concord.

While he and Hugh were decorating for Christmas in December 1988, Hugh suffered a stroke.  Though he would recover, Hugh died in 1989 at the age of 69 from heart failure. Bob sold their home and moved to Havenwood with his mother. Her health declined and she died not long after he moved to Concord.

I met the Reverend Wood through a mutual friend, Dick Pervonga, who had moved to Havenwood in 2006. Bob had remained engaged in gay history education through PFLAG. I introduced Dick and Bob to Capital Gay Men, a support social group. He participated in education and discussion until his health declined.

I met my future husband, Rejean, at this group and our first date involved a picnic and fireworks with Dick and Bob.  Three years later, Reverend Wood performed his last marriage ceremony when he married us in our backyard in Deerfield, New Hampshire.

At an event the Concord Monitor hosted for We Went to War, Dick and I were Bob’s special guests.  When Bob was escorted to the stage, his opening remark was “When duty called, even us queers served our country.” He received a standing ovation.

As Bob’s health declined, Rejean and I took him to doctors’ appointments, dinners at restaurants, events and our annual picnics and fireworks. We spent many nights talking about gay and civil rights, politics and his many adventures. He recalled stories about the interesting people he met throughout his life.

During his latter years, Reverend Wood was still called upon for his input on gay issues. David K. Johnson, author of The Lavender Scare called him numerous times.  Heather R. White who wrote Reforming Sodom quoted him several times in her book.

On June 29, 2018, Jessica Steyler, Senior Archivist with the Congregational Library & Archives in Boston, hosted a presentation of Reverend Robert Wood’s collection at Havenwood-Heritage Heights. This was the last event honoring Reverend Wood before his death.

Sadly, we lost our friend on August 19 of this year. A number of us who had cared for Bob were with him and upon leaving I whispered in his ear to let go. I told him that Hugh would be waiting for him with a big hug. The painting of the cowboy remained on Bob’s bedroom walls until his death.

Bob feared not being remembered as many of us probably do. I think that he feared mostly that we will someday forget the struggles that are part of our history.

A good way for Reverend Wood to be remembered is to have a memorial someday to the gay soldiers who served this country. Bob did not think that it had to be a national monument and that it could be funded privately.

Bob wrote this poem in 2007. It’s a great way to sum up the life of the man I knew and loved dearly.

We, you gay brothers,

Lived and loved for too short a time.

in someone’s war.  It hurt

For even in death we

and join others who

But we cannot rest in peace while full equality